Kim Kardashian Revealed North West Getting $13k Worth Bag From Kris Jenner’s Will!

Revealing a strange story of her first pregnancy, Kim Kardashian said that her daughter North West getting a luxury bag from Kris Jenner!

by Kumari Kriti Raj
Reading Time: 4 mins read
A A
2 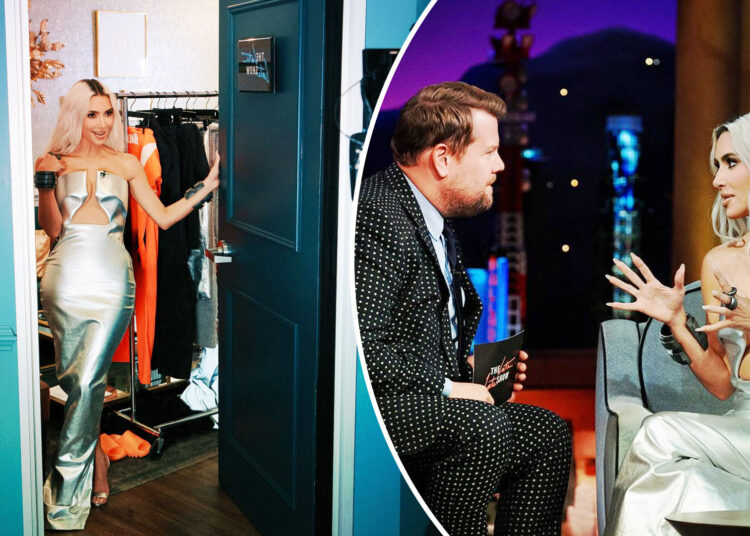 Kim Kardashian Revealed the secret behind North West’s $13k Worth Bag on the Late Late Show With James.

It is very strange for some Hollywood stars to go with the luxury that defines them. But when it comes to the hard work they put in everything then it becomes worth all to go with. Talking about any such celebrity then we should not forget about some of the reality stars who are working very hard in Hollywood to live a luxurious life.

Among them is Kim Kardashian who recently revealed her daughter North gets a designer bag worth $13000 from Kris Jenner’s will!

Kim Kardashian recently revealed on 14 September while appearing on the Late Late Show With James that her first daughter that is North West is going to inherit one of the Channel bags of Kris Jenner. This bag is going to the North when her grandmother going to die. It is covered in black crystal that was never got sold in any stores.

A similar bag was seen in the vintage and some of the reselling sites that was worth almost $13000. At first, Kim Kardashian said that the bag was originally going to be her but it got to her daughter Northwest.

Kim Kardashian also shared she was too excited about her first Channel bag when she was pregnant with North.

Kim Kardashian remembers the time when she was going to have a channel bag after she went to a photoshoot. She was pregnant at that time with North and they both were very excited related to the presence of Karl.

It was rumoured that Karl would be giving a bag to her if she is going to do the first photo shoot with him. Kim Kardashian responded and said she was very excited and felt like dreaming about that bag he was going to give.

Things started went downhill when Kris Jenner started working on the shoot. Kim Kardashian said: “The boots, the gloves, every accessory she can find … earrings, headband, hat, glasses, fanny pack, bag, backpack. It was like the craziest Chanel scene I’ve ever witnessed,”.

Kim Kardashian even waited for the moment when he is going to give her the bag but later on he goes over to her and give it to Kris Jenner. She even went to the bathroom and started crying because of the fact she is pregnant and some of the hormonal changes were going on. She has done the photoshoot just to get the bag but it went to her mother, at last, it is going to go with the North.

Kim Kardashian has also been open about what kind of person she wants in her life after her breakup with Pete Davidson which happened in August 2022. She said that she felt she had to go to different places because it is not working for whatever she is doing.

She added: “Maybe a hospital and meet a doctor. A law firm. I think it’s gonna be, like, scientists. Neuroscientist. Biochemist, Doctor, Attorney. That’s maybe what I envision in the future.”