Dua Lipa was seen on a date with Trevor Noah, witness said they were embracing each other! 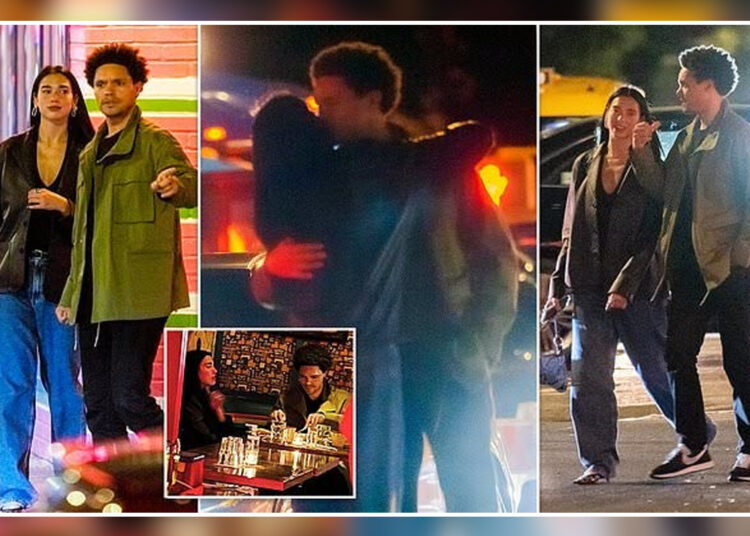 Dua Lipa Update: It is very common in Hollywood to see a new couple coming together and getting headlines. It has become a happening almost every week when we see new celebrities coming up with their relation as public or have got surrounded by rumors.

A lot of such things have happened in the past few weeks and days and we have seen famous names coming together. Among them is the singer Dua Lipa who is right now rumored to be dating the talk show host Trevor Noah.

A new couple alert has come as we have seen Dua Lipa and Trevor Noah coming up closer in New York City. The couple was on date night on 28 September as they were seen kissing each other. The 27-year-old singer and popstar were seen kissing the talk show host on the sidewalk while enjoying the evening stroll.

Both of them were seen inside a restaurant. Coming to their look then Dua Lipa was looking very beautiful and natural as ever. She was wearing mom jeans and a skinny black belt. She was also wearing a leather jacket over a plain t-shirt and a pair of pumps. She was also looking fabulous while carrying a handbag.

Coming to Trevor Noah then he was wearing Black jeans and a black t-shirt with a green jacket.

There was a person who witnessed the couple on their date and informed them that they both were sitting away from everyone else who was present at the restaurant. They both were very close to each other during the whole meal and left the place together. They both were embracing each other while kissing and hugging.

This is the first time that Dua Lipa is in the talk about a relationship after her breakup with model Anwar. Dua Lipa was recently in New York City related to the tour and got spotted on several occasions. It was recently when she was looking very beautiful in a perfect dress but it was without the talk show host.

The past relationship of Dua Lipa with Anwar lasted for 2 years till they decided to separate in December 2021. Coming to the sister of Anwar, that is Gigi Hadid, and Bella Hadid, then they called break-up as sad.