Bebe Rexha was a total vixen at JBL Fest 2022 in a black latex catsuit. 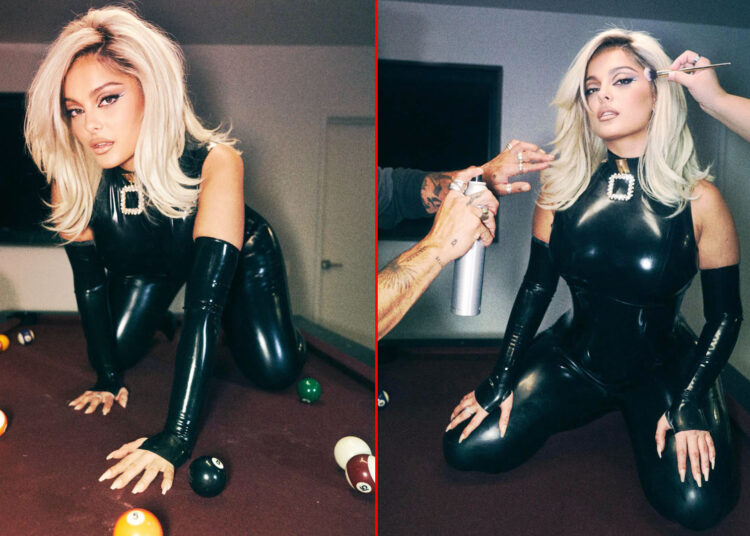 The pop sensation, Bebe Rexha who shared the look on Instagram the following day, delighted her 10.7 million followers with a stunning photoshoot of Kristen Jan Wong and caught the attention of Miley Cyrus‘ big brother, Trace Cyrus.

If anyone can heat up a shoot, it’s definitely Bebe Rexha. The Albanian beauty turned up the heat as she got up on all fours on the pool table, spread her legs, and stared into the camera with seductively parted lips. Another shot highlighted her hourglass figure and showed Rexha on her knees fine-tuning her hair and makeup team.

Dressed head to toe in skin-tight latex, the 33-year-old showed off her busty bosom in two close-ups that oozed sultriness. Although her one-piece featured a plunging neckline that completely covered her cleavage, her voluptuous edge was accentuated by a glittering, rhinestone-studded pendant attached to the collar.

Also Read: Gigi Hadid Was Seen In Silver Dress While Walking On Runway At Paris

Elsewhere in the five-part slideshow, which currently has more than 188,100 likes, the ‘Baby I’m Jealous’ hitmaker was sprawled out on a colorful sofa with a matte black backdrop drawing even more attention to her shiny outfit.

Laying on her side, she lifted her knee and propped herself up on her arm, allowing herself a close-up view of her outfit with fingerless gloves and high-heeled boots.

“Whatever happens at JBL FEST, stays at JBL FEST,” she captioned, prompting a flurry of gushing comments from fans and celebrities alike.

Bebe Rexha went all latex at JBL Fest, and the star showed off another festival look in a follow-up post in a red mini dress. Paired with a black choker and strappy silver heels, it clung to every curve of hers, with its ruffled style accentuating her curvy figure.

Meanwhile, the bandeau design exposed her arms and shoulders, while the thigh-high hem exposed her legs.

“#JBLFEST was such a blast!” read the label.