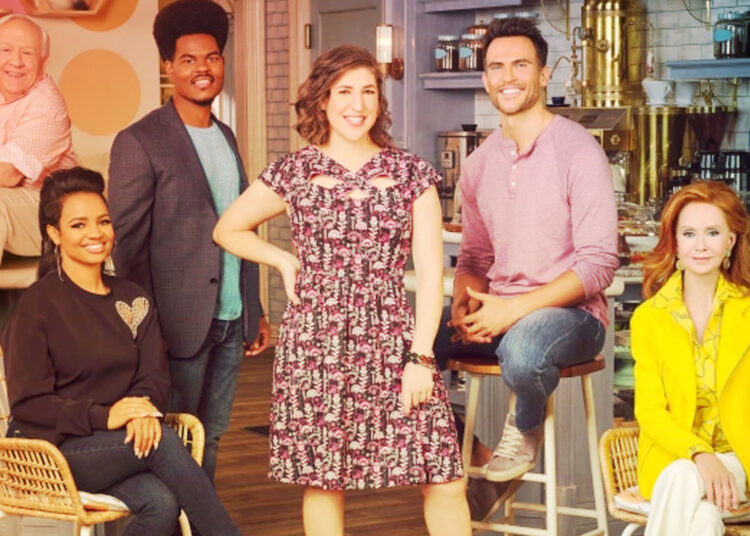 Call Me Kat Season 3 is all set to amaze you with its amazing storyline and most talented cast members. Starring The Big Bang Theory famed Mayim Bialik the American sitcom ‘Call Me Kat first premiered on January 3, 2021.

Darlene Hunt has developed this series that is inspired by Miranda Hart created British tv sitcom ‘Miranda’. The series was first announced on September 19, 2019.

The plot of the series revolves around a thirty ninety years old Kat who is a single woman and struggling against her mother and of course society to have her own way.

She believes that it is not impossible to be happy in spite of not having everything one wants in life. She leaves her job as a professor at the University of Louisville and opens a cat café with the money that her parents kept for her wedding.

From the very beginning of the announcement of the show, Bialik’s former co-stars of TBBT showed her their support and good wishes.

Jim Parsons, who played Sheldon Cooper in TBBT serves as an executive producer of the series. A Season 3 was renewed in May of 2022 and is set to release on September 29, 2022.

The protagonist of the series Kat is played by American actress Mayim Bialik in the series. From 1988 to 1989 she played the recurring role of Frieda in ABC’s sitcom ‘Webster’. In seasons five and six of ‘MacGyver’, she portrayed Lisa Woodman from 1989 to 1990.

In seasons two and three of the 2010 teen drama series ‘The Secret Life of the American Teenager’ she played the recurring character Dr. Wilameena Bink. But Bialik’s most prominent recognition came when she was cast as Amy Farrah Fowler, the weird neuroscientist who became the girlfriend of the weirder Sheldon Cooper in the popular sitcom ‘The Big Bang Theory in season 3 as a guest cast and from season 4 to season 12 as the main cast from 2010 to 2019.

The films in which Bialik starred are ‘Beaches’, ‘Pumpkinhead’, ‘Kalamazoo?’, ‘And the Chicago 8’.

As Sheila, the overbearing mother of Kat, American actress Swoosie Kurtz stars in the series. She played Laurie Morgan in NBC’s sitcom ‘Love, Sidney’ from 1981 to 1983 and won nominated for a Primetime Emmy Award under the category of Outstanding Lead Actress in a Comedy Series.

For the role of Tina Marie Chambliss in 1998 in the NBC medical drama ‘ER’, a role that again nominated her for Primetime Emmy Award as Guest Actress. From 2004 to 2006 she starred as Madeleine Sullivan in ‘Huff’ and won the nomination for another Primetime Emmy.

From 2018 to 2019 he starred as the main character Sid in the American tv sitcom ‘The Cool Kids. The films in which Jordan starred include ‘Madhouse’, ‘Eating Out 3: All You Can Eat, ‘Demonic Toys: Personal Demons’, ‘Love Ranch’, ‘Mangus!’, ‘Southern Baptist Sissies’, ‘The United States vs. Billie Holiday’ etc.

The films in which Jackson starred include ‘United 93’, ‘The Green’, ‘Price Check’, ‘Lola Versus’, ‘Mutual Friends’, ‘Six Dance Lessons in Six Weeks, ‘Love Is Strange, ‘Lucky Stiff’, ‘A Beautiful Now’, ‘Day Out of Days, ‘Hello Again’, ‘Hurricane Bianca 2: From Russia with Hate’, ‘Werewolves Within’ etc.

In the upcoming sci-fi movie ‘Borderlands’ he will be seen playing the role of Jakobs.

A waitress at the café named Randi is played by American actress Kyla Pratt. She starred in significant roles in the series ‘One on One, ‘Let’s Stay Together, ‘Recovery Road’, ‘The Proud Family: Louder and Prouder, etc.