Alia Bhatt looks like a sunshine in yellow pant suit!

The Gangubai Kathiawadi star is A1 since day 1 when it comes to fashion and she proves it why. 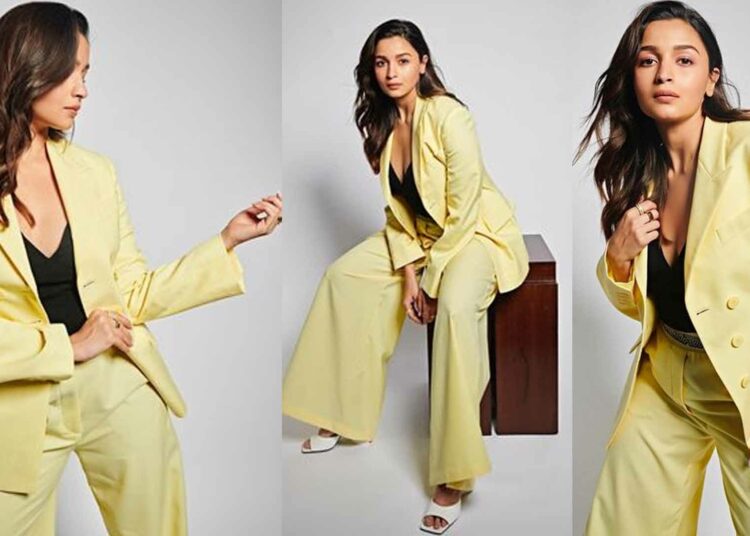 For Alia Bhatt and her family, the past few months have been nothing less than a fairy tale or a beautifully scripted movie.

In April, Alia married the love of her life Ranbir Kapoor and in just 2 months, she is now a mother-to-be, everything is going Alia’s way at the moment.

Even in her professional life, Alia has all the reasons to be happy as she is coming off being part of two successful films, Gangubai Kathiwadi which was a super hit, and RRR which was a blockbuster, and now Alia is gearing up for another chapter in her life as she makes her debut as a producer.

The trailer was launched on YouTube and has been trending since its release, the movie will be released on August 5 and fans are going wild.

Amidst all the buzz after the trailer was released, Alia dropped an amazing post on Instagram to add up to the noise, Alia posted a photo of herself wearing a clean lime yellow pantsuit, Alia was wearing a black top underneath a fine yellow blazer with a notch lapel, the blazer was matched with a yellow pant having flared hem and a fitted top.

Several gold rings and heels did the job for Alia as she looked mesmerizing. On the work front, Alia has some huge projects lined up, apart from the above-mentioned Darlings, which will be released on August 5.

Alia will be seen in one of the most anticipated films of this year Brahmastra with her husband Ranbir in the lead role, she is also working on Karan Johar’s directorial Rocky Aur Rani Ki Prem Kahani, starring Ranveer Singh in lead and the film will be released next year.

Alia recently wrapped up the shooting for her Hollywood debut film Heart of Stone directed by Tom Harper, actress Gal Gadot and Jamie Dornan are the lead actors in the film which will be released on Netflix next year.