The recently released teaser of 'Jawan' will make you glued to your screens. Tune in to know more! 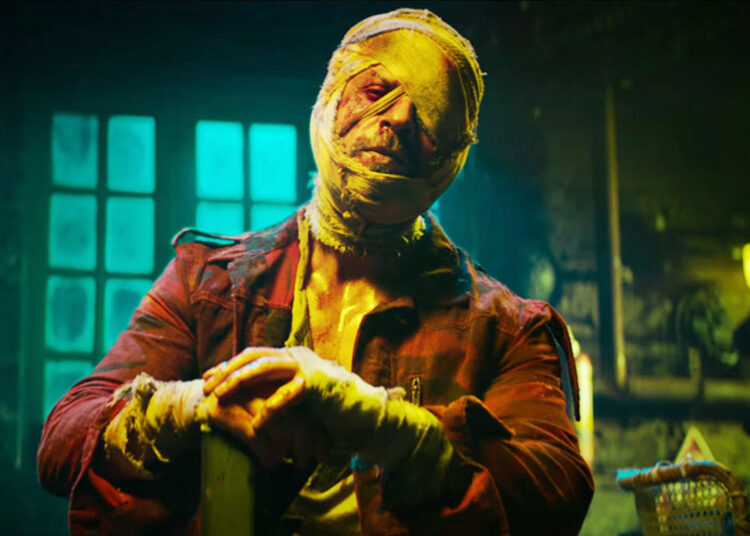 The King of Romance, aka Shah Rukh Khan, never ceases to amaze us with his impeccable acting skills. Now our favorite star is back with the action-packed movie we have longed for. But, of course, we are talking about the teaser of his upcoming film, ‘Jawan’.

So folks, scroll through to get the deets of Shah Rukh’s latest announcement of his upcoming movie. ‘Jawan’.

Shah Rukh Khan also dropped the movie’s official teaser on his Instagram handle. Within no time, the comment section got bombarded with the love and wishes of his fanatics and supporters. The post sparked a wave of euphoria among his fans.

B-Town’s King of romance enjoys a massive fan following of 29.6 million followers on Instagram. The teaser showcases Shah Rukh Khan in a never seen avatar. Shah Rukh Khan’s new look for Jawan, With his face covered partially and bruises all over his face, Shah Rukh Khan looks like never before.

Next, we hear a female voice calling Shah Rukh, ‘chief’ over the phone. Renowned singer Armaan Malik commented on SRK’s post, “And the King is back”.

But folks, despite Shah Rukh’s presence, do you know what makes this movie more special? ‘Jawan,’ starring Shah Rukh Khan, is shepherded by the acclaimed director, Atlee. Also, the movie is bankrolled under the banner of Red Chillies Entertainment.

Further, the teaser unravels the film to be multilingual. Thus, Jawan will be released in five different languages Kannada, Hindi, Tamil, Telugu, and Malayalam. Jawan cruises into cinemas on June 3, 2023. The teaser of Jawan has clocked up to four million views in less than 12 hours since its release on YouTube.

Also, Shah Rukh Khan will be working in the third part of the franchise, Don. Last but not least, Shah Rukh Khan also has co-produced Darlings which will be Alia Bhatt’s debut as a film producer.

Since Zero, Shah Rukh Khan’s fans have eagerly awaited his comeback on the silver screens. He was last seen in the romantic comedy-drama, Zero in 2018, starring opposite Anushka Sharma and Katrina Kaif.

With all of these forthcoming projects, we believe that Shah Rukh Khan will keep his accountants busy throughout the year. Operation Khukri and Dunki are also one of his upcoming projects.

Did You Know: Samantha Ruth Prabhu was offered Jawan before Nayanthara

Shah Rukh Khan got papped outside a dubbing studio. Take a glimpse!