Several pictures of the duo Aryan Khan and Nora Fatehi have surfaced on the Internet and it has been reported that the two are dating. 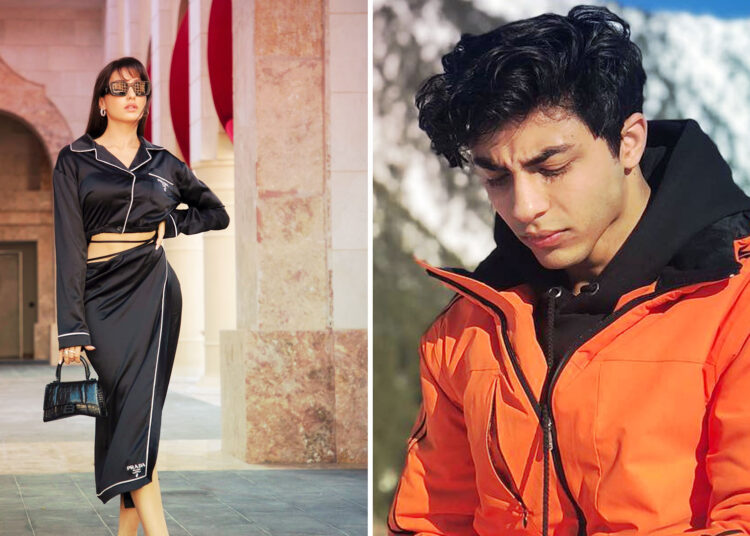 Are SRK’s Son Aryan Khan and Nora Fatehi Dating? Let’s Find out Below.

Bollywood has always been known for lots of linkups and breakup stories along with controversies related to them, from the iconic rumored relationship of Rekha and Amitabh Bachchan to the toxic relationship of Salman khan and Aishwarya Rai, Bollywood has seen it all, and it becomes even bigger when some star kids name is thrown into the rumors.

In a shocking development, it has been rumored that Aryan Khan, son of Bollywood superstar Shah Rukh Khan is dating the Morocco beauty Nora Fatehi.

Also Read: Palak Tiwari Is Too Hot to Handle In a Blue Crop-top and Denim Skirt.

Here is the Truth About Aryan Khan and Nora Fatehi Being In a relationship.

Well, we already know that Aryan Khan is no guest to controversies, and being the son of such a big star always comes with the risk of getting into controversy.

But let’s dig deep into the matter to know the truth, few pictures of Aryan Khan and Nora Fatehi were shared on the social news forum Reddit, the pics are from a new year party that took place in Dubai, and stars like Karan Johar and Suhana Khan were also present at the event, and in one of the photos, Aryan can be seen posing with Nora and this sparked the rumors of their dating.

Well, coming to the conclusion, those pictures are not enough to tell whether the duo is dating or not, it could have been just a casual encounter where they both posed for the camera or it may be some other way around, but it is definitely possible that the two are dating, but for the confirmation, we need to wait and let’s see if any of those stars will speak on the matter.

Meanwhile, Aryan Khan has also announced his arrival in the industry but unlike his father, he will be making his debut as a director. Aryan has been working on a web series that will be produced by SRK’s production house and will be released this year.