Elon Musk & Natasha Was Seen On A Romantic Date After Attending The Wedding Of Ari.

Elon Musk was seen with his new girlfriend Natasha on a date in the same weekend as the wedding of Ari! 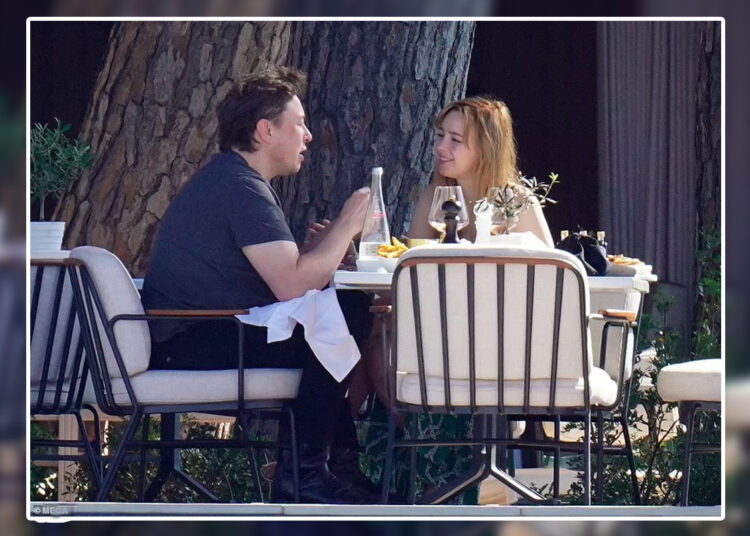 The Tesla founder Elon Musk is romanticly involved with Natasha. And that is the reason why he got spotted recently with his girlfriend after attending a wedding. It is not the first time Elon Musk was seen Natasha as they have been spotted spending a lot of time together.

The couple appeared to have a relaxing weekend in Saint Tropez. The Tesla CEO who is 50 years old is not minding to date 29-year-old partner Natasha. The couple was first spotted in February and were photographed sitting at a table.

They were having lunch and a beautiful moment at Cheval Blac Hotel. The couple was seen having a very beautiful conversation though the topic is still unknown. They both were smiling at each other’s conversation and has also love that certain point during their outing.

Elon Musk & Natasha Was Seen On A Romantic Date

Talking about the Fashion then both have maintained it well. Elon Musk was wearing a black t-shirt. He has maintained his look in black pants and has enjoyed his company with Natasha. Natasha was wearing a green and white summer dress.

We have also seen Elon Musk wearing a baseball cap in white color. On the other hand, Natasha was wearing a black baseball cap. The 29-year-old was also seen wearing sunglasses and her blonde hair was looking perfect on her.

The couple went for a lunch outing on the same weekend when they attended the wedding of Ari Emmanuel. The wedding was in the South of France. The wedding ceremony was handled by comedian Larry David. Elon Musk was there with some other familiar faces just like Emily Ratajkowski, Diddy, and Tyler Perry.

On the wedding day, the Tesla CEO was wearing a dark color blazer. He was seen wearing a white shirt and black pants while he was attending the reception. He was photographed while having a conversation with another guest at the event and was seen enjoying his drink.

The couple was also spotted 3 months before while they were going on a private jet together. The love birds have dated just some months but still feel that their relationship is quite strong.

Elon Musk came in relation with Natasha while he was at peak of his career. Both were making headlines related to their career. Natasha is an Australian actress and has starred in movies. She has also a music career.

If we talk about the recent involvement of Musk then he has recently defended his ex-girlfriend Amber Heard. He defended Amber Heard with Johnny Depp and wished both of them to move on. He took the side and said that they both are best and hoped they to move on.