See the first photos of Nicky Hilton Rothschild's third child and first son, who she welcomed a few weeks ago with husband James Rothschild. 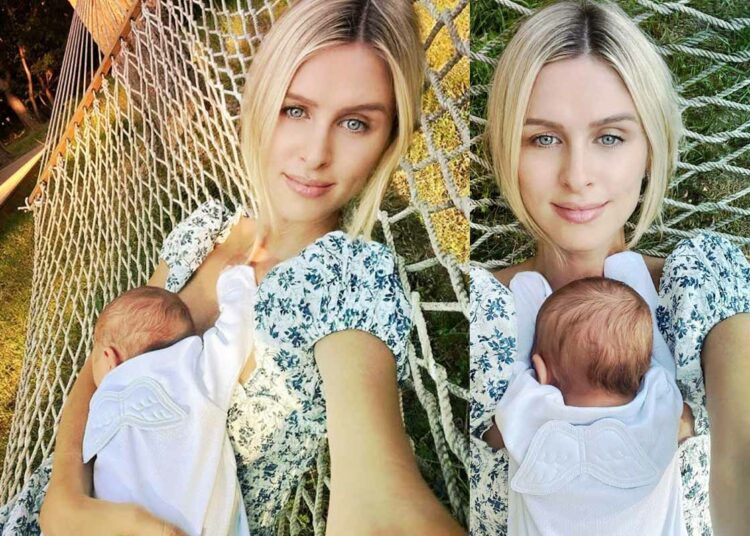 On July 21, the socialite—and Paris Hilton’s sister—posted the first photos of her third child with husband James Rothschild on Instagram. Nicky, 38, is seen in selfies lying on a hammock with the sleeping newborn, who is dressed in a white Marie-Chantal Children Angel Wing Pointelle Sleepsuit.

“Baby bliss,” the hotel heiress captioned one of the photos, which drew comments from her mother Kathy Hilton, and other celebrities including Bling Empire’s Christine Chiu and model Maye Musk—Elon Musk‘s mother.

On July 5, Nick announced the birth of her baby boy on Instagram, writing, “We are now officially a party of five! Sweet boy, welcome to the world. Mom, dad, and big sisters are completely smitten.”

Nicky Hilton and James Rothschild, a 36-year-old British financier, have two daughters, Lily-Grace Victoria Rothschild, 6, and Theodora “Teddy” Marilyn Rothschild, 4. The name of their baby boy has not been revealed by the couple.

Let’s have a look at Nicky Hilton’s Recent photos

Nicky’s new photos show the couple’s son wearing hand-me-down pajamas: She posted a throwback photo of herself holding one of her daughters, who was dressed identically, ahead of Mother’s Day 2021.

At the start of the COVID-19 pandemic last year, Nicky opened up about motherhood and the challenges of raising two children. During that time, the majority of schools in the United States went completely or partially remote.

Her daughters are “so close,” she said. “I’m so glad they had each other during this pandemic, for their sake and mine,” she added.

“Unbeknownst to me, I became a nursery school teacher this past year, which I had not planned on,” she told Interview magazine. “However, the time I’ve spent with my family has been the silver lining to this entire pandemic for me.”