Kanye West Is Back On Twitter After The Takeover Of Elon Musk!

Kanye West got unblocked and the first tweet he tweeted was the checking whether he is really back or not! 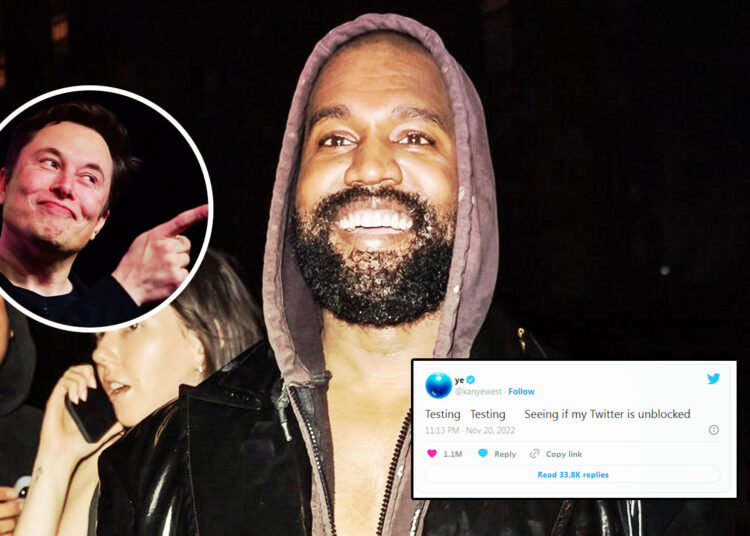 Kanye West would be happy right and might be thanking Elon Musk, as he is no longer banned from Twitter. A lot of things have changed in the past few months and weeks.

Whether it is related to the personal life of celebrities or the professional one, a lot of changes have affected them in a bad way while some brought positivity in their life. Coming to things related to social media then we know how some celebrities got banned or left social media.

And among them is Twitter which has got a lot of popularity these days. Since the time Elon Musk got hold of Twitter, a lot of celebrities left it while some came back. Among them is Kanye West who finally returns to Twitter when his account got unblocked.

45-year-old Kanye West is right now back on Twitter. Just a few days after when his account got suspended from Twitter, he came back at the time when Elon Musk got the takeover. It was since 4 November 2022 when Twitter went in his favor and he started doing unexpected things.

Here Is What Kanye West Did After Being Unblocked from Twitter.

This comeback of Kanye West got confirmed when he tweets about his testing whether he is unblocked or not. It was on 20 November 2022 when he came with 31.9 million followers. Coming to the first tweet that came after he got unblocked then it has got 73.5 retweets and 24.9 replies in just a few hours.

Kanye West got thrown out of the platform in October 2022. It was related to his antisemitic comments that came on Twitter and other social media platforms. Due to these, a lot of Twitter violation was done from the policy and he got blocked. It was not just related to Kanye West but Donald Trump also return on Twitter.

Coming to Elon Musk then he has shared some of the things related to Twitter. Calling new Twitter freedom of speech but not at all freedom of reach, the billionaire also talked about negative or hate tweets.

After anti-semitic comments done by Kanye West, it was not just the social media platforms that throw him out but many big brands.

Whether it is related to Balenciaga or something else, Kanye West has lost a lot of things in a few hours and days. He has also attacked many big names in Hollywood including the wife of Justin Bieber that is Hailey Bieber and Gigi Hadid who came in support of the Vogue editor.