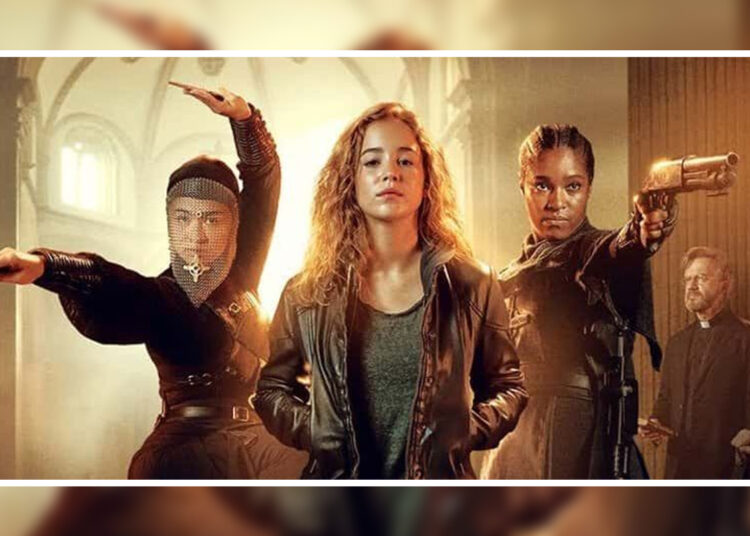 From that time Ava becomes part of an ancient Order called the Cruciform Sword. The task of that order is to combat the demons who live on the Earth. Ava soon discovers that the evil forces of heaven and hell are an attempt of controlling her.

The series was released on July 2, 2020, on Netflix. Now Warrior Nun Season 2 is confirmed by Netflix, we can expect to stream it soon on the streaming site.

Now there are a number of fantasy series that you may watch if you are waiting for the newer season of the popular series ‘Warrior Nun’ to arrive.

The Order –
Number of Seasons: 2
Dennis Heaton created this horror drama series that revolves around a secret society where magic is taught and practiced. As Jack Morton, a college student joins the society called Hermetic Order of the Blue Rose, he delves into the history of the organization only to unearth a fatal war between magical dark arts and werewolves.

Jake Manley plays the role of Jack Morton in the series. Other cast members of the series include Sarah Grey, Matt Frewer, Max Martini, Louriza Tronco, Sam Trammell, Katharine Isabelle, etc. The series ran from March 7, 2019, to June 18, 2020, on Netflix.

The Shannara Chronicles –
Number of Seasons: 2
Alfred Gough and Miles Millar created this American fantasy series that is based on Terry Brooks’ ‘The Sword of Shannara’ trilogy. The plot of the series is set in the fictional land called Four Lands. The series opens with the banished demons returning from Forbidding, the place where they were locked by Ellcrys.

Ellcrys is the name of an ancient tree. As the tree Ellcrys falls on the verge of death, the protagonists of the series Wil, Eretria, and Amberle embark upon an adventure of protecting the tree as well as releasing the demons from banishment.

Austin Butler, Ivana Baquero, and Poppy Drayton play the roles of Wil, Eretria, and Amberle respectively in the series. It ran from January 5, 2016, to November 22, 2017, on MTV and Spike.

Cursed –
Number of Seasons: 1
Frank Miller and Tom Wheeler created this American fantasy series that is adapted from the same-named illustrated novel Tom Wheeler and Frank Miller. The story is a re-imagination of the renowned Arthurian legend.

The plot of the series revolves around and is told from the perspective of Nimue. Nimue is a young heroine who possesses a mysterious gift. Her destiny is to be the Lady of the Lake whose life is supposed to be tragic as well as powerful.

When her mother dies, her unexpected companionship with the young mercenary named Arthur makes her travel with him on the quest of finding Merlin. Nimue is demonstrated as a symbol of rebellion and courage in the journey.

Katherine Langford plays the role of Nimue in the series. Other cast members of the series include Devon Terrell, Gustaf Skarsgård, Daniel Sharman, Sebastian Armesto, etc. It premiered on July 17, 2020, on Netflix.

Shadow and Bone-
Number of Seasons: 1
Eric Heisserer developed this fantasy tv series that is adapted from Leigh Bardugo’s ‘Six of Crows and ‘Shadow and Bone’. The plot of the series is set in the Grishaverse, a fictional universe consisting of Ravka, Shu Han, Fjerda, Novyi Zem, Kerch, and Wandering Isle nations. Each of the nations is made of linguistic, cultural, and traditional elements from the real world.

October Faction –
Number of Seasons: 1
Damian Kindler created this American supernatural tv series that is adapted from the same-named comic book by Steve Niles and Damien Worm. The plot of the series revolves around a couple who hunts monsters as they relocate to their family home.

As Fred Allen, Deloris Allen, their twin teenage daughter, and son Viv and Geoff Allen move to the new home, Fred begins to be haunted by the memories of his father’s death. Meanwhile, Geoff and Viv start to show supernatural behavior.

Warrior Nun Season 2: When Will It Release? and What We Know So Far

Warrior Nun Season 2 – Everything To Know About The Series

Warrior Nun Season 2: Release Date Possibilities and What to Expect