English Actress Florence Pugh will be featured on the cover of Vogue’s Winter Issue, and she also told the fans about her mother's role behind becoming the Hollywood Actress. 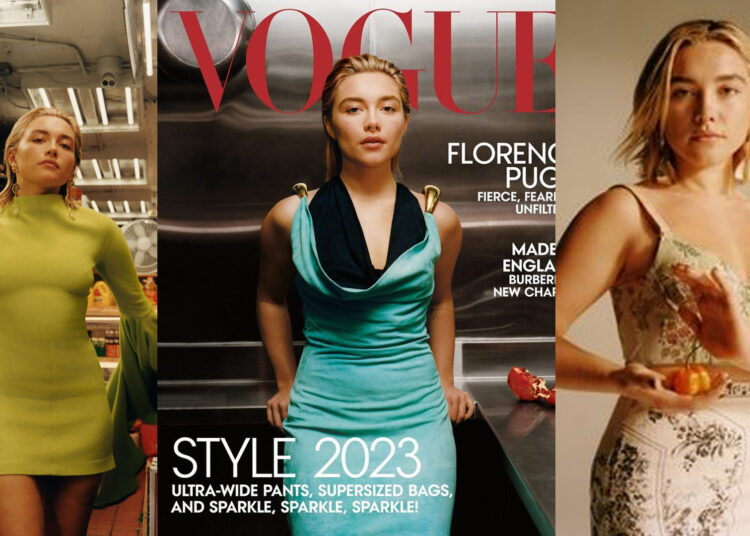 Florence Pugh has been featured on Vogue’s Winter Cover and she said that her mother had played an important role in her decision of becoming an actress in Hollywood. In a recent post of Vogue Magazine on Instagram, the actress can be seen in various posts from showing her kitchen to talking about her entry in Hollywood.

In one post in Vogue Magazine Florence can be seen inside her kitchen and the magazine has captioned it with:

This is cooking with @florencepugh, bitches!

In another post-27-year-old actress can be seen on the cover of Vogue Magazine, wearing a glamorous gown and I must admit Florence Pugh went really fearless and unfiltered in the interview with the magazine.

Vogue has also uploaded the full video of cooking with Florence Pugh on Youtube and she can be seen cooking. If you don’t know her father is a professional chef.

In another post in Vogue Florence Pugh can be seen in a floral dress and she is looking so adorable in the dress that the post has already got millions of likes and thousands of comments.

In the post, Vogue mentioned the actresses’ opinions on Hollywood Young Relationships. She had said

“I think young relationships in Hollywood are so easily twisted because they add to the gossip sites. And I think I was in a relationship that didn’t do any of that.”

In just a few hours of posting the post is viral as one of her fans has written:

Most exciting actor to come along in decades. Looking forward to what’s to come from her- for sure.

Another fan of Vogue Magazine commented: “The fantasy element of American Vogue is nonexistent. No drama, no story, no sense of whimsy or creativity… just Flo holding a fish.”

The Black Widow actress has also been in controversy of her statement during the interview in Vogue, where she had said that ” I’ve never been scared of what’s underneath the fabric”.

Since her statement, she is being criticized for her generalization of women’s outfits in public.

In 2022, Florence Pugh has been seen the movie ‘The Wonder’ and ‘Don’t Worry Darling’ and in 2023 she will be seen comedy-drama film ‘A Good Person’ alongside Morgan Freeman next she will be part of Christopher Nolan’s Oppenheimer, which is a biographical film based on father of Nuclear Bombs ‘J. Robert Oppenheimer’ and Pugh will play the role of Oppenheimer’s love interest psychiatrist and physician ‘Jean Frances Tatlock‘.

Florence Pugh will also be seen in Dune: Part Two in the role of Princess Irulan.