Golden Globes 2023 remained in highlight because of red carpet appearance as many celebrities came with great fashion! 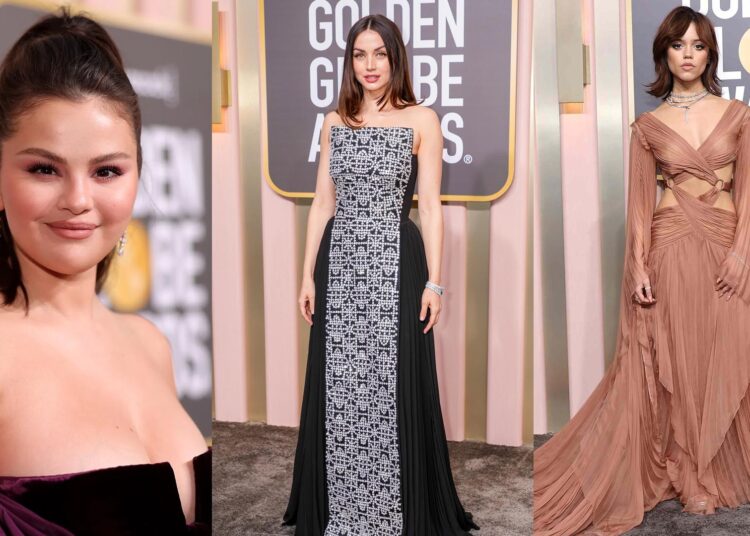 Golden Globes Red Carpet 2023 happened and we have seen many celebrities coming in their best attire. The year has started and we are going to see a lot of award functions happening to appreciate the work of great artists.

Whether it is related to the music awards or the awards for acting, everything is going to come our way. And if we talk about any award function in particular that happened related to acting recently then one cannot forget about the recent happened Golden Globes 2023.

Before the ceremony started, we have seen great red-carpet appearances of many celebrities coming to the Golden Globes 2023. The award function happened at Beverly Hilton on 10 January 2023. It was a great evening as it created history with amazing artists.

The first one that comes on the list is Selena Gomez who entered the red carpet with her Valentino design dress. The dress was black and had purple sleeves. It was an off-shoulder dress coming with eggplant sleeves. Her hair was tied in a ponytail and she maintained black high heels.

The next one who rocked the red carpet was the leading character of the Wednesday series. It is Jenna Ortega who has given the best of her fashion while she was looking stunning as ever in a sheer dress. This dress was of Gucci in a coffee color while the actress was wearing a necklace and perfect makeup.

Salma Hayek was also there in an unreal style like a mermaid. She was also wearing Gucci in she is a dress with coffee color from inside and outside wrapped in a silver jewel. Her hair was tied up while she added the accessories with just earrings.

Lily James was rocking the red carpet with a red dress. It was a red huge gown with a big train as she appeared in Los Angeles on 10 January 2023. The actress was wearing a necklace while her hair was open.

The next one that came in the wave was Anya Taylor Joy who decided to come in a yellow cropped-up and long skirt. She was looking amazing with her long hair and perfect makeup. The actress came with two bracelets and a matching necklace with earrings.

Adding one more to the infinite list is Ana de Armas. She was also looking gorgeous in her Louis Vuitton dress black and white. The front was printed in a black and white pattern while the rest of the dress was black. By adding almost no accessories she just went with silver and diamond bracelets.