Britney Spears Was Seen In Glasses Before Dancing With Sam Asghari!

Britney Spears was seen dancing heart out with husband Sam after having selfie in glasses! 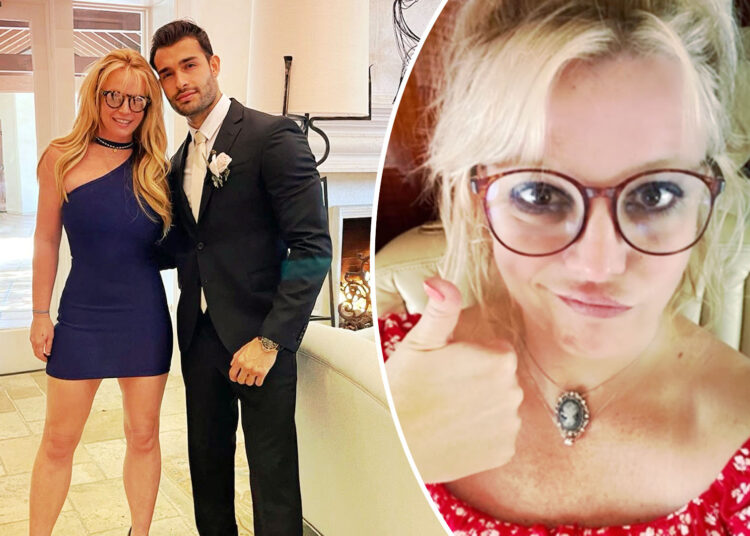 The singer Britney Spears was recently seen in glasses after posting a post-holiday selfie. We have seen celebrities carrying some looks as if it is very natural for them.

Whether it is related to carrying any dress or any makeup or even any hairstyle, they just give their best in it. If we talk about such things then we cannot forget about the celebrities of Hollywood who are well known for their talent as well as their fashion. And if we talk about their casual fashions then the most common is the sunglasses or glasses.

Something like this recently happened as the singer Britney Spears was seen wearing glasses. She uploaded a picture of a selfie on 27 December 2022. The 41-year-old Britney Spears was looking adorable as ever in her red dress with a pendant. She was makeup free while showing thumbs up to the camera and giving a very cool look.

Instead of going with a very long caption, Britney Spears has decided to give it just a few words. And that’s the reason why she has written how she tries to be s*xy and shit on Instagram but she is a nerd of the century.

Here you can check out Britney Spears’ Wearing Glasses.

Without a doubt, Britney Spears was looking very beautiful in her makeup-free look. Her big sunglasses was matching with her smokey eyes and blonde hair.

It was recently when Britney Spears was in news related to her Instagram post. With a long caption, she has written how her husband Sam Asghari does not like when she uploads any open picture.

But when it comes to her husband Sam than he always defended the singer if she gets any hatred on social media. The love between Britney Spears and Sam Asghari is going in some other way as they are growing together. It was recently when the singer uploaded a video of herself and Sam dancing in a very hot manner.

Britney Spears was wearing a blazer dress and when it comes to Sam then he was wearing all blank with black pants and a black shirt. The singer is dancing to her heart and at the same time, Sam was blushing a lot. Coming to the caption then she kept a long one and concluded it with a kiss given to her Prince.

Britney Spears has also shared how she dances with her heart before everyone joined the dance floor. In the background, one can see the purple designs and decoration which is going well with the mood of the singer.