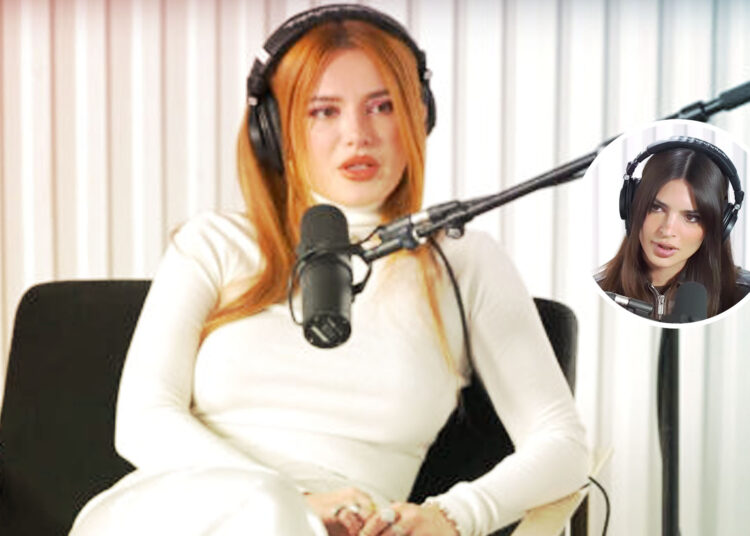 Bella Thorne, a former Disney star, talked about a disturbing meeting when she was just 10 years old. And it seems like her early performing experiences were not all rosy.

During an interview on Emily Ratajkowski’s High Low podcast, the 25-year-old expressed her outrage when the anonymous director accused her of flirting when she was 10 years old.

Bella Thorne went on the offensive against a director who accused her of “flirting with him” and making “him incredibly uncomfortable” when she was only ten years old in this podcast.

“I had a director give me criticism once when I was 10,” she said, adding that the director called her agency and explained why she didn’t receive a position.

“The casting director contacts my agency, and my agent calls my mother, and they’re like, ‘So she’s not moving forward because the director felt like she was flirting with him, and it made him incredibly uncomfortable,'” she explains. she says.

According to The Hollywood Reporter, Bella remembered on the December 27 show. “What on earth are you talking about, man?”

Bella, 25, claimed that she “still thinks about” that conversation “every day,” and that it drives her “crazy.” She later admitted that she had to remind herself that, as a youngster, she was “not the issue” in that circumstance.

“I’m trying to discover practically every flaw in myself,” she went on. “‘What did you do, Bella?’ they ask. ‘What did you do to make him feel this way?”Bella, stop it,’ I say every time. But even that thought adds to the issue.

The Shake It Up actress was also perplexed as to how the casting director came to that conclusion, explaining that “in a director’s session, you can’t say or do anything.”

“You perform the scene, say hi, and go out,” she explained. “There is no time for u to go and sit on their lap or make them feel uncomfortable.”

Here is what more Bella Thorne Shared About the Incident.

Bella’s interview comes five years after she initially acknowledged her prior s*xual assault while supporting the anti-s*xual misconduct fundraising drive Time’s Up.

In response to a Twitter comment, she stated in December 2017 that she was assaulted as a youngster and that Disney had nothing to do with it. The following month, she told more about her experience on Instagram.

She also brought out about a time she “nearly got fired” at 14 years old from the Disney Channel for wearing a “two-piece on the beach”.

“I almost got fired from the Disney Channel once because I was 14 and I was wearing a two-piece on the beach,” the ex-Shake It Up star explained. “I don’t know why this stylist I was hanging out with placed this chain on me that looked like a body chain. I don’t mind. I almost got fired because of a fan who took a snapshot of me on the beach.”

The actress stated that the photographs were “all over,” which sparked outrage.

She said, “Blaming me and putting pressure on Disney to fire me, but Disney didn’t fire me, but they were also saying, Hey, we’re getting a lot of heat for this, everyone’s getting heat for this because you’re in a bikini on the beach.

“‘So, the next time she goes to the beach, she should wear board shorts and a loose T-shirt.”

Ratajkowski told Bella Thorne to “forgive” herself for being a child, and the actress added that she hopes the director, whom she did not name, “rots in hell.”