Although she has posted as Jenna Ortega, currently it's really difficult to separate her from Wednesday Addams. It's like if Wednesday Addams was dressed in a suit and were asked to pose for a shoot. 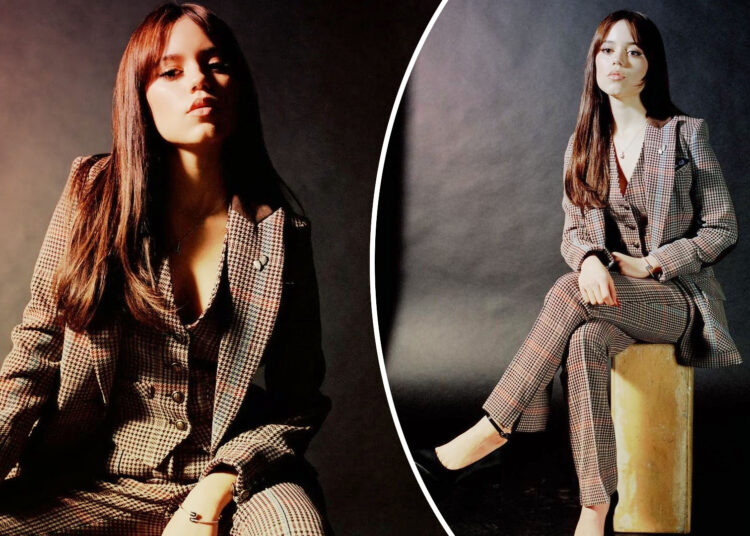 Jenna Ortega looked flawless in her checkered suit! Jenna Ortega is an American actress who started her career as a child actress and got recognition as Young Jane on the CW comedy-drama series – Jane The Virgin.

She performed as Ellie Alves in the second season of You, then she also did another teen series The fallout. In 2022, she starred in the Netflix Fantasy series Wednesday. With a fan following of 9.9 million subscribers, she has gained a lot of popularity, particularly this year because of Wednesday Addams.

In her recent Posts, Jenna Ortega has been seen wearing an amazing brown-colored suit, posing in the camera for New York Times. She has done a very neutral nude makeover, her brown hair is being styled in a middle partition and she’s wearing black heels.

Many people have commented on her posts including Emma Myers, her co-star on Wednesday, Gwendoline Christie, Ariana Greenblatt, and many other celebrities, and people went crazy for her.

The amount of likes and comments on her posts shows how much popularity she has gained and how people wait for her posts.

Although she has posted as Jenna Ortega, currently it’s really difficult to separate her from Wednesday Addams. It’s like if Wednesday Addams was dressed in a suit and were asked to pose for a shoot.

In her story, she mentioned Enrique Melendez and said,” Thank you for the suit and how awkward shooting for a film can be”. There she posted a short clip of how the shoot was done, of which the final results were the recent posts.

Anyway, whether as Jenna Ortega or as Wednesday Addams she looks stunning and the amount of confidence she portrays through her posts is something to be inspired by.