Disha Patani Flaunts Her Toned Figure In a Black Bikini.

The Ek Villian 2 star Disha Patani is one of the hottest divas in the Bollywood industry and her bikini photos are a treat to the eyes. 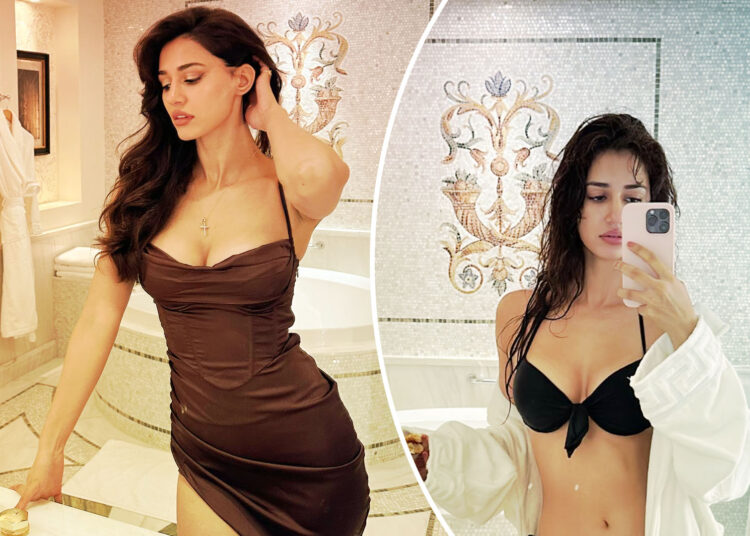 It’s official! It’s Disha Patani’s world, and we are all living in it, period. The gorgeous diva stunned the Internet on Tuesday with her Instagram post.

She is one of the most popular names in the Indian film industry and even more popular on social media, with almost 55 million followers on her Instagram account, Disha is currently the 14th most followed personality on Instagram and her followers are actually very lucky as she drops pics and videos that are out of this world.

In a recent post on IG, Disha Patani raised the bar of hotness and we confirm that nobody is even close to that level, she shared a picture in which she was rocking a black bikini with a white bathrobe, and her perfect figure was a full-on display and her curves were looking as if it’s carved out of rocks, her wet hairs added several tons to her drop dead hot look.

Here you can check out Disha Patani’s Toned Figure in Black Bikini.

Queen Disha captioned the post with advice to eat carbs, and her followers certainly acknowledged that as the post already has 2 million likes and 20k comments including several comments from the industry well-knowns.

Disha’s personal life is also in buzz these days, she gets spotted quite often these days with Siberian actor and model Alexander Alex Ilic, rumors are that the two are secretly dating after Disha and Tiger’s breakup, however, there is no confirmation on any of these rumors.

Meanwhile, on the work front, Disha was last seen in Ek Villian 2, which was released in August and failed at the box office, she will make a return with Yodha alongside Siddharth Malhotra, the film was scheduled to be released on Nov 11 but is getting delayed for some undisclosed reason.

Her other upcoming movies include Project K and an untitled movie that is getting filmed currently, and both movies will be released next year.