The Baaghi actress Disha Patani is one of the hottest divas in the Bollywood industry and her IG posts are a treat for the fans. 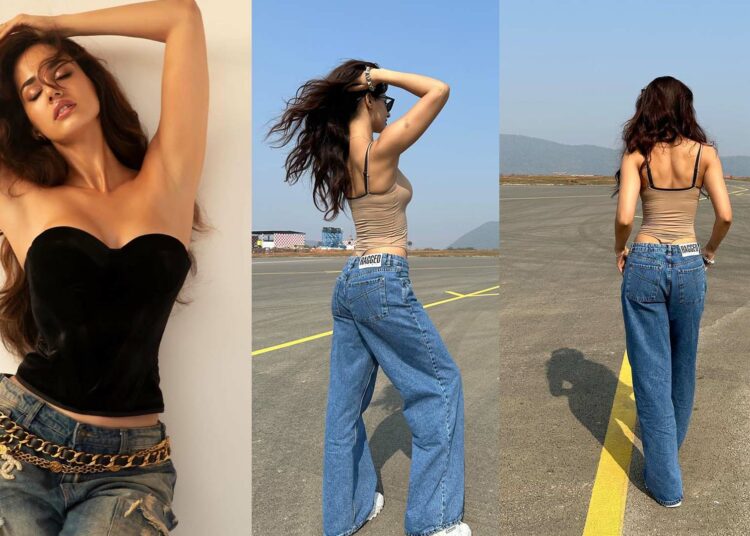 Disha Patani is trying her best to control winters with her hotness, and rightfully so, as they don’t call her the hottest Bollywood actress for nothing.

Disha is hands-down, the s*xiest diva in the industry, and nobody even comes close to her, be it looks, figure or personality, she is just perfect everywhere and that’s also one of the reasons why she enjoys such a huge fan following.

Now, Disha Patani is turning up the heat in the middle of a highway, she took to her Instagram where she has a humongous following of 56 million, and dropped a random post in which she can be seen wearing a body-hugging peach-colored bodysuit and spaghetti top, she paired the outfit with blue denim jeans.

Here you can check out some recent Posts of Disha Patani.

Disha looked like the epitome of hotness while flaunting her sharp and chiseled back, her amazingly toned figure was full on display while she was absorbing some sunlight.

The Malang actress also threw a kiss for her fans in one of the clips, the post fetched over million likes and over 20k comments. Disha is one of the most popular names in the industry right from the time she made her Bollywood debut back in 2016, with the movie M.S. Dhoni: The Untold Story.

Disha won several awards for her performance including Best Female Debut at IIFA Awards. Disha started to gain huge attention when she was declared the national crush of India and she started getting many film offers, she was featured in several films like Baaghi 2 and 3, Malang, Radhe, Bharat, and most recently she was seen in Ek Villain Returns, Disha has always been in news for her relationship with Tiger Shroff, unfortunately, it appears that the couple has parted ways and currently Disha in dating Siberian actor and model Aleksandar Alex Ilic.

Meanwhile, on the work front, Disha will next be seen alongside Sidharth Malhotra in the action-thriller film, Yodha which has been produced by Karan Johar and the movie will hit the theaters on July 7 this year.