Suga and Stephen Curry meet each other in Japan during basketball game.

by Roochi
Reading Time: 3 mins read
A A
3 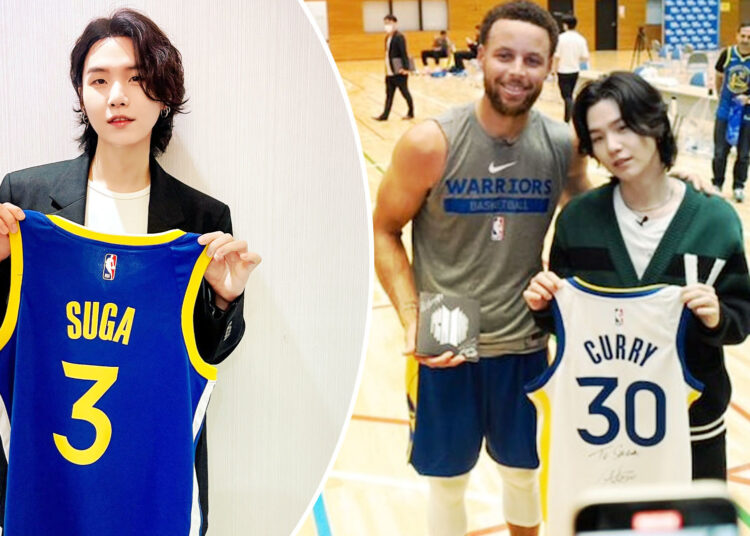 Rapper, composer, and record producer Min Yoon-gi, also known professionally by his stage names Suga and Agust D has recently met Golden State Warriors star, Stephen Curry. He made his debut in 2013 as a member of the South Korean boy band BTS, which is managed by Big Hit Music.

At the Warriors-Wizards preseason exhibition game at Saitama Super Arena in Japan on September 30, SUGA was spotted in the first row looking like a superstar. The BTS member was spotted sporting a Valentino color-blocked satin bomber jacket with black pants and leather Chelsea boots. A Curry shirt was signed for the BTS member and a BTS “Proof” album was signed for the Warriors champion as the two continued to exchange gifts.

Here you can check out some pictures of BTS’s Suga and Stephen Curry.

While talking with each other Stephen Curry even mentioned to Suga that his kids and family are big fans of BTS.

According to the picture, the two seemed to have a great chat with one another. Intriguingly, SUGA’s stage name is derived from the phrase “Shooting Guard,” which refers to the basketball position he played in high school. As a fan, this was a full-circle moment for him.

Additionally, Suga got to talk and interact with Klay Thompson and Draymond Green from the Warriors. SUGA was seen in videos posted to Twitter by the NBA on September 30 while watching the game.

Additionally, he got to meet Naomi Osaka, a tennis legend. Fans were especially blown away by how good SUGA looked with his long hair pulled back to one side. These followers raved over the idol’s appearance in the game while posting videos and pictures of him on various social media networks.

Stephen Curry was chosen as an eight-time NBA All-Star and eight-time All-NBA selection, including four times for the first team. He has also won four NBA championships, been twice voted the NBA Most Valuable Player (MVP), and been awarded the MVP of both the NBA Finals and the NBA All-Star Game.

On the other hand, Suga is credited as the composer and producer of more than 100 songs by the Korea Music Copyright Association, including Suran’s “Wine,” which reached number two on the Gaon Music Chart and won best Soul/R&B track of the year at the 2017 Melon Music Awards.