No Pants No problem look at Kylie Jenner's rocks on Instagram. She mentioned a morning with @loewe and @jonathan Anderson in her caption holding a cup in her hand.

by Riya Sinha
Reading Time: 3 mins read
A A
0 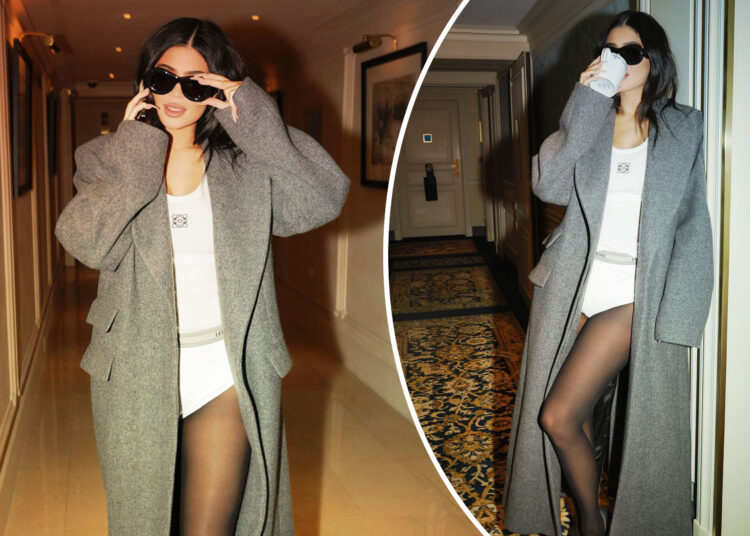 Kylie Jenner always turned up the heat with her collection. Jenner has over 350 million followers on Instagram. She continues with her no pant trend, kylie carried her outfit very well. Jenner wore an oversized jacket matching with black high heels. She has posted 6 pictures of herself on Instagram with the caption “No Pants No problem”.

Lampshading, which first started blowing up our Insta-feeds last fall, is the pairing of boots with an oversized jacket.

Many Hollywood stars have followed this trend in the past as well.

Although, celebrities are liking this trend of ‘No Pants’. They are following the same concept of the oversized top with a boot or some Ballenaries. Earlier, Stars like Jennifer Lopez, Ariana Grande, Beyonce, and Hailey Baldwin rocks the floor with her No pant look.

Jennifer Lopez was once seen in New York on July 31, in a loosely fitted, long-sleeve shirt dress and denim boots.

There she completed her look by wearing light jewelry and light makeup with her open hair. Her fans mistook his boot for pants.

Beyonce rocked the No pant trend while rocking out at Coachella in April. However, in the month of July, Kim Kardashian also appeared with this trend in the grey Yeezy getup.

Even in April 2017, Kylie Jenner wore an oversized shirt with an embellished shoulder while going for a pretty little things launch. There she finished her look with a pair of purple-colored high boots.

Who doesn’t want to start their morning like Kylie Jenner?

For now, with this look, Kylie has attracted millions of followers herself. Jenner wore a long grey jacket with long sleeves. She is looking stunning in a black sunglass. Kylie is holding a cup in her hand it might be a cup of coffee or anything else. She started her morning wearing such an awesome outfit.

Kylie Jenner has put nude lip shade on her lips and light pink makeup on her face. She has posted six photos of herself in giving different-different poses. Kylie is holding her sunglass in one of her pictures.

However, in the rest of her photos, it seems like she is moving to go somewhere. Her black shiny hair is praising her look. Kylie Jenner’s followers will be waiting for her next No pant trend.