Zendaya Was Seen In Black Dress After Celebrating Her 26th With Tom Holland!!

After celebrating her birthday with family and Tom, Zendaya was seen in black dress and high boots! 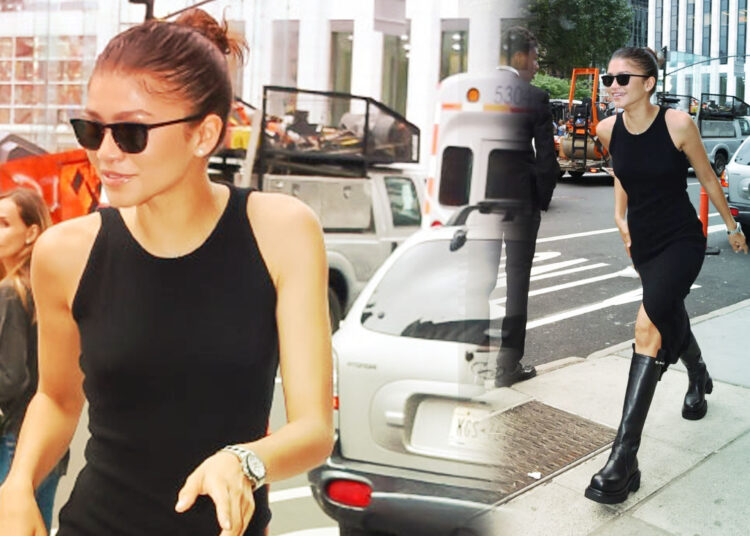 Zendaya was spotted after celebrating her 26th Birthday with tom Holland. Black is a color that never going to get out of the trend whether it is related to fashion or related to people.

If we talk about the fashion of our celebrities then it is the most attractive colour we have seen for them and that is the reason why a lot of celebrities were seen wearing black in past few days.

Among them were Hollywood actors and actresses like Zendaya who was seen wearing a black dress with boots that were looking very pretty as ever.

The 26-year-old actress Zendaya was seen in New York City in her hot black dress that was looking very beautiful on her. She was wearing high boots that were matching with the dress and went along with the black sunglasses she was wearing.

It was on 7th September 2022 when Zendaya had her hair in a casual style like a bun. When it comes to the accessories then the black sunglasses and silver watch with necklace chain were enough for her to look gorgeous.

Here you can check out some recent posts of Zendaya.

It was just a few days ago when Zendaya celebrated her 26th birthday on 1 September 2022. The glow of her birthday is still on her face and that is the reason why we can see her smiling all over the way till the time she reached her destination.

To celebrate her birthday and thank all her fans, the actress has posted a picture of herself on Instagram that was from her childhood time. Through the picture, one can guess that zendaya is a summer lover who gives a lot of changing expressions with changes in time.

Her birthday has not been celebrated out loud but with her boyfriend Tom Holland and her mother. Coming to the side of Tom Holland then he has not uploaded a single picture of himself with Zendaya or any picture that signifies her birthday.

It is the privacy he wants in his life and that is the reason why he has taken a kind of little break from his work. He announced all these things in August 2022 through Instagram where a confirmation came that he won’t be handling his Instagram id or any other social media because of his mental health.

Couples started dating each other in 2021 when they were seen kissing publicly. They were later on seen on many dates and trips after the release of their recent movie called Spider-Man. Tom Holland and Zendaya are going very smoothly and seriously in their relationship and that is the reason why they don’t want any kind of attention.