On Instagram, Kanye West made fun of the split between his ex-wife Kim Kardashian and Pete Davidson. He distributed a false news report that said the comic was "dead."

by Shreya Singh
Reading Time: 3 mins read
A A
2 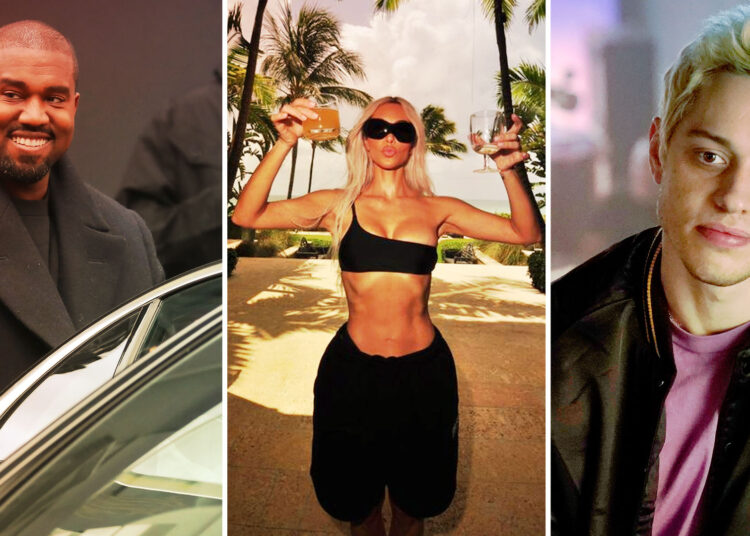 After dating for nine months, Kim Kardashian and Pete Davidson reportedly split up on August 5 and there is someone who is enjoying it, He is none other than Kanye West.

After the reality star hosted a Saturday Night Live broadcast, the two began dating in October 2021. In a comedy where Davidson portrayed Disney’s Aladdin and Kardashian played Princess Jasmine, the two celebrities enjoyed an on-stage kiss. Later, the reality star said that there had been sparks during their first kiss, which had piqued her interest in the comedian.

The two have been seen out on enticing dates all around the world. Davidson does not use social media, but Kardashian has posted multiple images of the couple there. The SNL star even got a tattoo of her four children’s initials and the name of the SKIMS billionaire on his chest.

E! News reports that there is no conflict between Davidson, 28, and 41-year-old Kardashian. The former couple will continue to be friends, a source informed the media.

Davidson and Kardashian, according to the insider, “had a lot of love and respect for one other,” but their separation and demanding schedules “made it incredibly tough to continue a relationship.”

Another insider informed the tabloid that while Kardashian and Davidson divorced, the reality star has no intention of reconciling with Kanye West.

Kim Kardashian and Kanye West Are Getting Back Together

The news that Kim Kardashian and Pete Davidson were splitting up seems to be exhilarating to Kanye West. As the couple marked the end of their nine-month relationship on Monday morning (August 8), Ye took to Instagram to post a tribute.

He uploaded a bogus New York Times front page item with the heading “SKETE DAVIDSON DEAD AT AGE 28” in the since-deleted tweet. He had no caption for his critical Instagram post, which is the only one on his profile right now.

Kanye, who has four children with Kim, 41, disapproves of the relationship between his ex-wife and Pete, 28. His song lyrics and social media posts called out the former Saturday Night Live cast member earlier this year.

Kim expressed fear for Pete’s safety in response to Ye’s threats, which Ye inexorably leaked to his Instagram. Ye allegedly stopped publicly criticizing Kim and Pete in March after informing Kim that he would be “getting assistance” during that period.

The founder of SKIMS and Kanye were rumored to be back together after Kim and Pete’s separation was announced on Friday, Aug. 5.

This was especially true given that Ye had been so forthright in his efforts to make amends with Kim. However, a Kim-related insider told HollywoodLife that the couple is “going through with the divorce, which will be finalized soon.” The person continued, “Kim is not getting back with him” after filing for divorce from Ye in February 2021.

Kim and Kanye will continue to raise North, nine, Saint, six, Chicago, four, and Psalm, three, as joint parents. They were developing a better co-parenting relationship while Pete was away filming in Australia.

This insider believes Pete’s absence has everything to do with Katye and Kim’s peaceful co-parenting arrangement, which was exclusively revealed to HollywoodLife in July before the separation of Kim and Pete.

Kanye is currently residing in Malibu with his family and spending a lot of time there. He frequently visits Kim’s home for supper with the kids and feels at ease being there when Pete isn’t home, according to Kim.