Romantic dramas have a way of bringing out our buried feelings, whether we need to laugh a little, cry a little, or find solace for our wounded hearts. 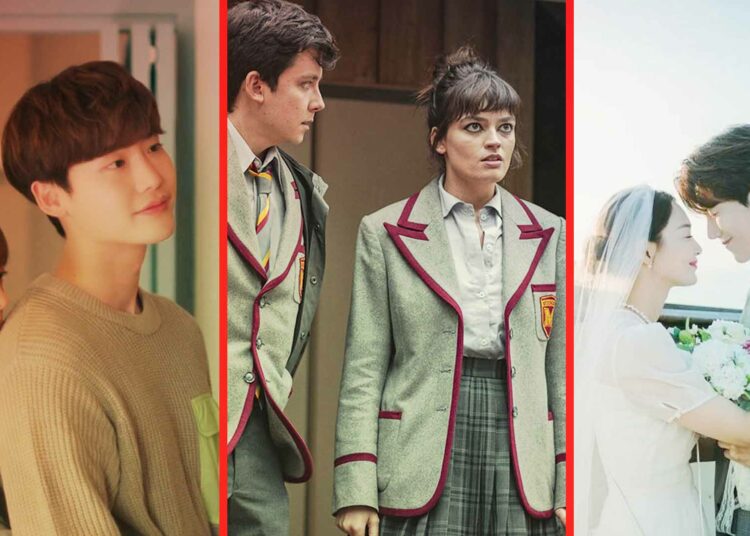 Every one of us enjoys binge-watching Rom-Com Shows, whether we want to admit it or not. Romantic dramas have a way of bringing out our buried feelings, whether we need to laugh a little, cry a little, or find solace for our wounded hearts.

And Netflix has you covered in this regard as well. The titles in its collection, which range from romantic comedies to fantasy shows, are often very moving. So, without further ado, here is a rundown of some of the most enjoyable rom-com shows now available to view on Netflix.

Hometown Cha-Cha-Cha follows the attractive and smart dentist Yoo Hye-jin when she leaves her work in Seoul and is set in a peaceful small town. She effectively faces exclusion from the medical profession after accusing a supervisor of utilizing unethical business methods and spreading her identity online.

She travels to a coastal village to start her own practice after finding it difficult to succeed in Seoul, and it’s there that she meets Hong Du-sik, a jack-of-all-trades.

Although both of these young, gorgeous individuals are keen to deny it, sparks rapidly fly between them. Hometown Cha-Cha-Cha is an endearing slice-of-life Korean drama that tells a heartwarming story about a charming town that is teeming with unique people.

On July 4, 2022, Virgin River Season 4 was released. Mel Monroe, a nurse practitioner, and midwife is the main character of the story.

Mel relocates to Virgin River, a small town in Northern California, in search of a new beginning. She rapidly learns, however, that things aren’t quite as straightforward as she had anticipated: her house is in disrepair, the neighborhood doctor doesn’t believe in her, and she is still troubled by a previous disastrous relationship.

But as time passes, Mel gradually starts to find her place in society and might even start to consider falling in love once more. If you’re looking for something mellow and comforting to cheer you up, Virgin River is indeed an ideal watch for you.

Romance is a Bonus Book, starring Lee Jong Suk and Lee Na Young, is one of the best Korean love dramas we’ve seen on Netflix. The two have an amazing connection together.

Cha Eun Ho is a popular and appealing author who serves as the chief editor at a publishing house. Despite his young age, he behaves professionally and politely at all times.

Things shift, though, when he runs across Kang Dan Yi, a boyhood buddy, and once successful copywriter. She has since divorced and is now a single mother looking for employment. Soon after Dan-Yi starts working at Eun-company, Ho’s relationship intensifies.

Goblin is regarded as one of the greatest South Korean dramas ever produced and was written by the legendary Kim Eun Sook. It is a must-watch since it has the most original plot and OST, including “Beautiful Life” and “Stay With Me.”

Additionally, you will see the greatest duo ( Dong-Wook and Gong Yoo). The protagonist of the tale is Kim Shin, a soldier in Goryeo’s military who was regarded as unbeatable before his terrible demise.

Due to a curse, he is still alive and on the verge of immortality 900 years later. To break his curse and put an end to his suffering, he must locate the ideal spouse.

Eun Ji Tak, meanwhile, is a perky and upbeat high school girl who has the ability to perceive ghosts. Kim Shin meets Eun Ji Tak, and it turns out that she can assist him in ending his immortality.

The success of the Netflix comedy Sex Education demonstrates that a simple idea is sometimes all that is required to create an engaging story if you have interesting characters and an amazing ensemble.

Sex Education is a hilarious show that follows the lives of the students, faculty, and parents of the fictional Moordale Secondary School as they deal with a variety of personal challenges, many of which are associated with s*xual intimacy.

Despite its comedic nature, the show is capable of bringing you to tears in an instant, thanks to some of the amazing character moments. The show’s second season struck the ideal balance, despite the fact that seasons one and three were entertaining.

Sex Education is lighthearted and has lots of comedy. It embraces the absurd idea of a youngster offering Sex Ed guidance to other teenagers and knocks it out of the park.

Mae Martin and Joe Hampson are the creators of the comedy-drama television show Feel Good in the United Kingdom. Mae Martin plays themselves in this romantic comedy, which also stars Charlotte Ritchie as Mae’s girlfriend, George.

In this romantic comedy series, Canadian comedian Mae Martin plays herself and follows her life in London as she battles her drug addiction and chases a connection with a lady who has never been in a relationship with another woman.