Mom to be Alia Bhatt glows in Black floral dress

Alia Bhatt surprised everyone with her stunning look during Darlings teaser release on Netflix. Expectant mom Alia's outfit sent her fans into craze. 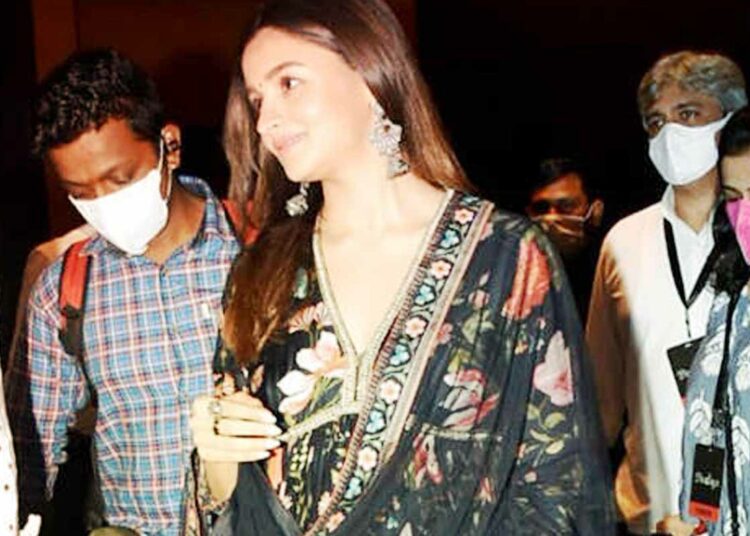 Alia Bhatt is an actress who always won hearts with her cuteness and style statements. Be it her airport look, her red carpet look, her trailer launch look, or her casual look, Alia never misses a chance to get a thumbs up from the fashion police.

And as the Humpty Sharma Ki Dulhania actress is expecting her first child with Ranbir Kapoor, she’s also grabbed attention with her maternity style. Interestingly, Alia has become very fond of black these days and has decided to add it to her wardrobe.

The Raazi actress has recently seen slaying in black again as she was clicked outside Sanjay Leela Bhansali’s office.

In the pictures, Alia looked stunning in a black Kurti style with a matching palazzo and floral print. She added elegance to her ethnic outfit with her charming smile and those heavy earrings.

Alia Bhatt accented her look with a black bindi and we love it. Alia Bhatt, who looked gorgeous in a set of V-neck floral suits, garnered immense love for Darling’s trailer.

Here is the trailer of Darlings

Alia was snapped as she headed to her car, all smiles for the bugs. For the uninitiated, Alia and Bhansali recently collaborated for Gangubai Kathiawadi and the film opened to rave reviews.

Meanwhile, talking on the work front, Alia Bhatt is looking forward to the release of her first production Darlings.

Also starring Shefali Shah, Roshan Mathew, and Vijay Varma, the film will be released on Netflix on August 5.

Apart from this, she will also be seen in Ayan Mukerji’s much-anticipated fantasy movie Brahmastra, which will be her first collaboration with her husband, Ranbir. Kapoor. The film will also star Amitabh Bachchan, Nagarjuna Akkineni, and Mouni Roy in lead roles and will release on September 9.