The San Diego Comic-Con has officially started after several months of anticipation, with Day 3 of the activities having just been completed.

by Om Prakash Kaushal
Reading Time: 6 mins read
A A
3 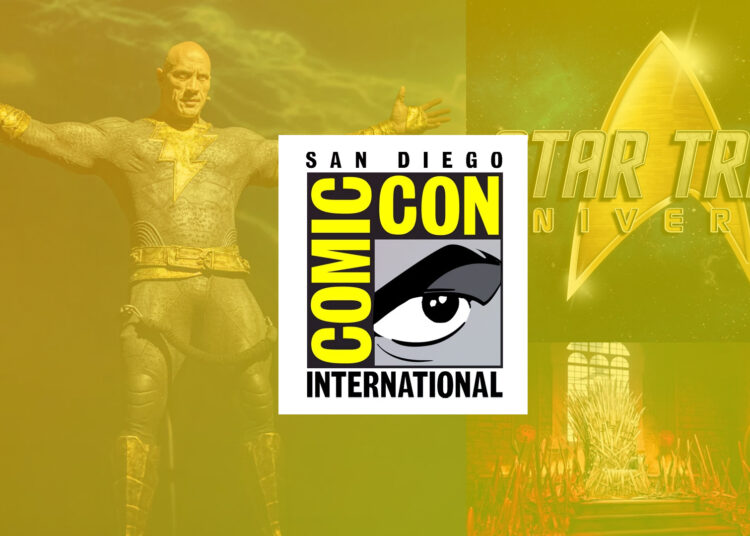 San Diego Comic-Con 2022 has officially started after several months of anticipation, with Day 3 of the activities having just been completed. The largest convention for comic books, video games, movies, and TV shows took place in San Diego, California, for these four days, drawing followers of pop culture from all over the world.

With exclusive glimpses at movies like Black Adam and Shazam!, Warner Bros. Studios showed its upcoming theatrical slate of DC movies while Paramount unveiled a gorgeous D&D trailer. Day 3 of the San Diego Comic-Con was packed with thrilling special screenings, announcements, and engagement zones, such as Fury of the Gods and many more. As a result, the convention fever continued to rise throughout the day. Here is a summary of what happened during the panel talks, as well as some new activities that were seen at the event.

The full itinerary, panel descriptions, and attendees from July 23, 2022’s San Diego Comic-Con are available. The panels to look out for are listed below:

With the release of Black Adam on October 21st, the DC Extended Universe is poised to embark on a brand-new period of motion pictures. In San Diego in 2022, Comic-Con International will include prominent performers, including Dwayne Johnson and Shazam! Zachary Levi, star of Fury of the Gods, spoke on stage in Hall H about the shared superhero universe produced by Warner Bros.

Prior to the event’s start, participants received passes with Shazam/Black Adam’s lightning bolt on them to wear around their necks. The panel’s moderator, Tiffany Smith, stepped up to the podium to begin. Fury of the Gods was the first movie mentioned. Shazam was yelled at the audience by Smith. Levi entered the stage after a brief clip from the movie had finished playing.

House Of The Dragon

The highly anticipated House of the Dragon spin-off series’ trailer has been released, and the competition has begun. After a few teasers, HBO’s two-minute and 33-second trailer shows us more dragons and Targaryens, as the prequel will focus on the demise of the House Targaryen.

On August 22, House of the Dragon will start streaming on Disney+ Hotstar. Here are a few of the major aspects of the program that the trailer teases. The teaser opens with a young Rhaenyra Targaryen (Milly Alcock) standing in the Great Hall in front of her uncle and future husband, Daemon Targaryen (Matt Smith), who is seated on the Iron Throne.

Star Trek has bravely continued to grow to become one of the most popular entertainment properties (once again). Ahead of the Star Trek Universe panel that took place at Comic-Con 2022, the franchise already has no fewer than nearly half a dozen successful television programs airing on Paramount+, several multimedia spinoffs such as the Star Trek Fleet Command mobile app, and of course, new Star Trek movies in the works at Paramount Pictures.

With all of that said, it comes as no surprise that Star Trek had a larger presence at SDCC 2022 than it had seemingly ever before. This was the ideal occasion for a large Hall H panel commemorating everything Star Trek! Before the first panel was announced, a Sizzle clip of Star Trek Universe footage was displayed, featuring Patrick Stewart, Gates McGadden, Alex Kurtzman, and Rod Roddenberry, the son of Star Trek originator Gene Roddenberry, from Star Trek: Picard Season 3!

Interview With the Vampire

It’s time to dive into a brand-new installment of Interview With the Vampire. The turbulent connection between two 18th-century vampires is the subject of the classic 1976 novel by Anne Rice, which was made into a 1994 motion picture starring Tom Cruise and Brad Pitt. The zombie Gothic horror tale is now being revived by AMC as a seven-episode television series.

Even though it won’t air until the fall, the first trailer has arrived and offers a fresh perspective on Louis de Pointe du Lac and Lestat de Lioncourt. Rolin Jones, the show’s creator, stated during the show’s panel discussion on Saturday at San Diego Comic-Con, “It is an aggressive, beautiful love tale.”

At San Diego Comic-Con 2022, Netflix released a brand-new teaser for The Sandman, and it is nothing short of magnificent. The Sandman might be one of Netflix’s most popular shows to keep an eye on in the coming days. It is filled with some weird imagery that can turn eye-catching and even violent.

Tom Sturridge’s Dream and numerous other enduring figures from Neil Gaiman’s comic book series are featured in this new video. Gaiman (American Gods) and Allan Heinberg (Wonder Woman, Grey’s Anatomy), who will serve as showrunner, will pen the live-action series. David S. Goyer, known for his work on Batman Begins and Foundation, serves as an executive producer on the drama that Warner Bros. Television is producing.

Seth MacFarlane, the Emmy-winning actor, writer, director, and producer of The Orville: New Horizons, revealed that all three seasons of the Emmy-nominated, beloved sci-fi sitcom would be streamable on Disney+ beginning on August 10 at San Diego Comic-Con. Additionally, Hulu will continue to stream the epic space adventure series. The show’s third season, which debuted on Hulu on June 3, followed its 2017 Fox debut.