Enola Holmes 2: Why Henry Cavill’s Sherlock Holme should have a bigger role

Enola Holmes 2: An adaptation, laid out from Nancy Spring’s first book of the series under the same name, is this eponymous mystery film. Released a couple of weeks earlier, it has already fetched enough applause of ‘fast-paced’ and ‘highly entertaining’ for Brown’s performance which would nudge career towards even bigger success.

Harry Bradbeer took over this project with an all-star cast. The title character is portrayed by Millie Bobby Brown(also pronounced as its producer ) shouldering most of the responsibilities to run its course.

Playing his elder brothers; are the scheming Mycroft Holmes and Sherlock Holmes by Sam Claflin and handsome Henry Cavil. Helena Bonham Carter is cast as her free-spirited mother, Louis Partridge as Lord Tewkesbury; his only runaway company and Fiona Shaw, Frances de la Tour, and others in supporting roles.

The insightful and youngest sibling of Holmes’s family is raised to be strong-willed, independent by her mother who leaves her fending for herself with a cryptic set of clues. Her snooty oldest brother Mycroft thinks her a misfit as a lady in the Victorian Englan while Sherlock is appreciative of her sharp mind, beating him to the punch.

Carving her way out she inadvertently rescues escaping Tewksbury and traces out his secret killer, developing sprightly chemistry with him. It also dictates  “our future is up to us”   message by her forward-thinking mother considering women suffrage in the patriarchal society.

So two concepts function side by side with the spry Enola mentally and physically shaping herself for a life in this dark and confusing world.

It is unanimously agreed that the film lacked prominence on the role of Cavil’s Sherlock Holmes. The story would still pivot to Enola even if Sherlock had a bigger role in it.

Mycroft finds her unkempt and uncouth for representing the society and tries to get her edified in conforming to the standards whereas Sherlock ( another antagonist in the novel) is considerate, emotionally connecting to her potential sister.

In the end, he insists to take over her tutelage from Mycroft which is contradictory to his usual standoffish and deadpan attitude. His formidable adversion in the novels was ignorantly debarred from playing out in the movie.

However their mutual admiration definitely deserved a better screening and his showcase of suavity gravitating towards Enola’s demeanor and they pitted up against each other in solving a mystery should be pursued in the second one, which will probably be filmed remotely.

Follow us to keep track of its latest updates. 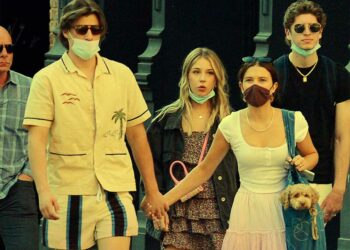