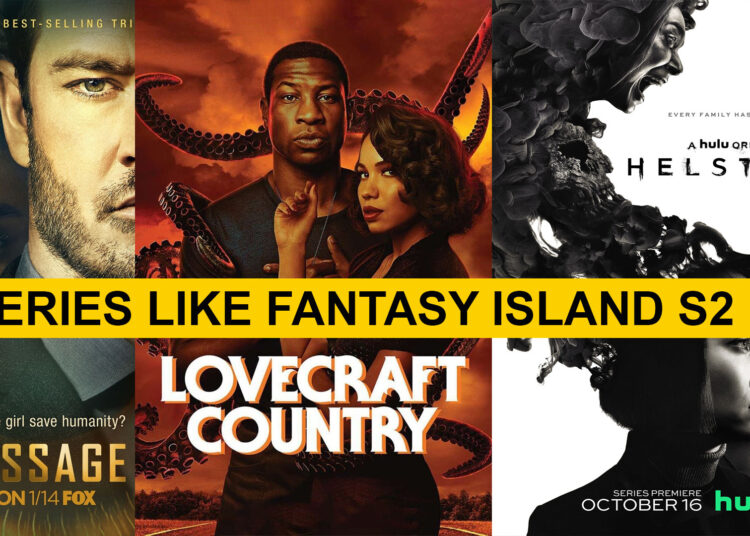 Fantasy Island Season 2 returned with a bang! and those who remained at the opulent resort once more lived out some of their most fantastical fantasies.

Roselyn Sanchez is back as Elena Roarke, a progeny of Mr. Roarke from the first Fantasy Island. The relaunch maintains the same basic idea of the original series from the 1970s, with fresh guest actors who bring their own personal baggage to the show each week. These characters want to come to some form of peaceful resolution inside themselves by the conclusion of the episodes. That isn’t always the case, though.

For those of you who couldn’t get enough of Fantasy Island season 2, we have great news for you. Looks like FOX has renewed Fantasy Island for a 3rd Season. But, it may take quite some time, until then we’ve made a list of shows similar to Fantasy Island on which you can binge on.

If you haven’t seen Fantasy Island season 1, this is an excellent opportunity to do so. Visitors flock to Mr. Roarke’s and his three helpers’ tropical paradise to fulfill their wildest wishes.

To learn the truth about their parents’ demise, the orphaned Baudelaire kids must overcome obstacles and battle the villainous Count Olaf.

Young Victoria “Vic” McQueen learns she has the ability to open portals that enable her to locate misplaced items. She runs meets a lot of other “inscape travelers” as she explores this secret dimension, some of whom are kind and some of whom have been tainted by their power. Vic becomes an enemy of Charlie Manx when she meets him; Manx is an immortal who survives by consuming the souls of children.

The son and daughter of a strong and enigmatic serial murderer are Daimon and Ana Helstrom in Helstorm. As they use their individual attitudes and abilities to chase down the terrifying worst of mankind, the siblings have a difficult interaction.

A loving youngster who is half human and half deer sets out on a risky journey through a post-apocalyptic world in quest of a new beginning with a tough protector.

The newest addition of the Midnight Society, her first terrible story, and what occurs to the club when the terrifying events of her narrative start to really unfold in their tiny town are the subjects of this three-part, self-contained miniseries.

In Victorian England, the youthful and lovely Alice talks about a fascinating new place on the other side of a rabbit hole in Once Upon a Time in Wonderland. Her physicians, who believe Alice is mad, intend to make her erase everything. While Alice is eager to put everything behind her, she is aware that this reality exists. The Knave of Hearts and the White Rabbit come to her rescue just in time. The trio descends the rabbit hole to Wonderland, where absolutely nothing is impossible.

The series chronicles Leonardo Da Vinci’s “untold” narrative through his early years in Renaissance Florence. He fights to exist within the limits of his own world and time as a 25-year-old painter, inventor, swordsman, lover, dreamer, and idealist as he learns to not just envision, but construct the future.

The compilation horror show, Lovecraft Country follows 25-year-old Atticus Freeman, who embarks on a road journey throughout 1950s Jim Crow America with his buddy Letitia and Uncle George to discover his missing father. They need to survive and conquer both white America’s racial terrors and demonic ghosts straight out of a Lovecraft book.

A post-apocalyptic tale, The Passage is about a failed US secret program that transforms a group of death row criminals into extremely contagious vampires, and an orphan girl who may be the only one who can avert the subsequent pandemic.