Hailey Bieber Was Seen In Oversized Jacket And Crop While Going Out With Justin Bieber!

Hailey Bieber was seen in great fashion as she was seen rocking a suit with her husband and matching time with him! 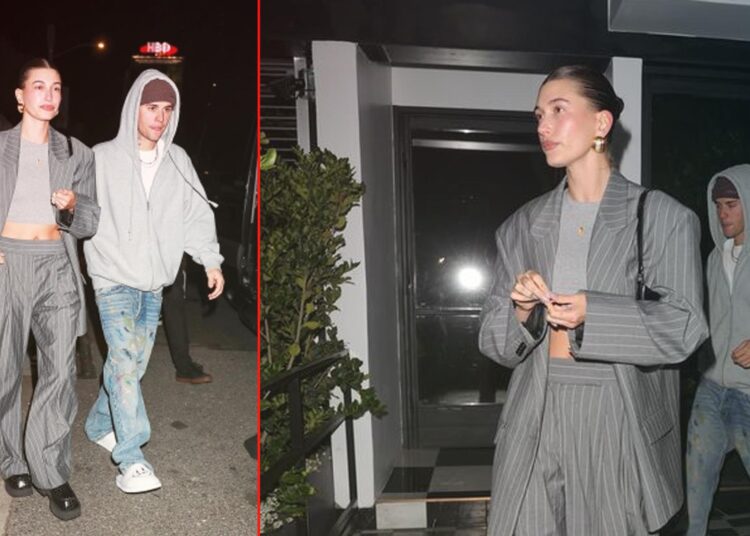 Hailey Bieber was seen rocking her look with an oversize suit and crop top. We have seen a lot of celebrities going with a fashion that may or may not be liked by others but it is always appreciated by fashion critics.

And if we talk about such things then who can be better than models and their business as well as professionals with personal life matters on this? And if we talk about any model that is known to be one of the greatest in terms of its fashion then we cannot forget about Hailey Bieber.

It was recently when the former model Hailey Bieber was seen maintaining her look in an oversized suit and crop top while going out with her husband Justin Bieber.

The 26-year-old model always looks stylish and the same goes for her 28-year-old husband. They both decided to match their color tones on their recent dinner date.

Also Read: Sofia Vergara Gets A Bit Cozy with Her Husband Joe Manganiello

Here you can check out some pictures of Hailey Bieber and Justin Bieber after their Dinner Date.

Coming to the whole look then Hailey Bieber decided to go with a striped suit that was matching well with her boots as well as her crop top. When comes her husband then he was wearing a grey hoodie and oversized jeans.

He was seen wearing white shoes and a brown cap. The accessories of the model were not that much, except for a gold earring and natural makeup. Her hair was pulled back and was maintained in a bun.

This dinner date came after a few weeks when the couple got spotted holding hands while doing some shopping. Even at that time, they were going quiet casual with baggy clothes and fashion. This fashion included a coat with a crop top and baggy jeans which were maintained by Hailey Bieber.

And when it comes to Justin Bieber then he has maintained again with white sneakers and baggy jeans with a white shirt.

It is not the first time we have amazingly seen them since spending time together. It was just a few days ago when they celebrated their holiday with Kylie Jenner and her sister Kendall Jenner in Aspen. Travis Scott was lacking however it was, later on, revealed that he and Kylie Jenner are no more together as a couple.

Coming again to Hailey Bieber then she was seen dancing for the New year party while enjoying it with everyone. It was recently when the model tore when she heard her cousin Ireland is welcoming a new baby into the house.