Kim Kardashian was in tears while sharing how hard it is to coparent children with Kanye West! 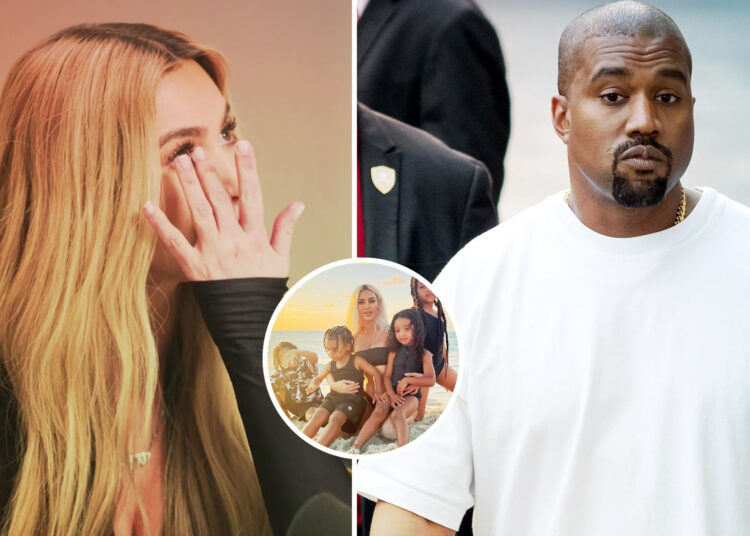 Kim Kardashian was in tears as she discussed hard times in co-parenting with Kanye West. Nowadays co-parenting has become a common thing as couples try to give equal portions in the life of their children without having any kind of gap in their life.

And that’s the reason why they try to do their best and always fill the gap of missing one of their parents. And if we talk about the divorce or separation that happens between celebrity couples then it becomes harder with things and works.

Something like this has recently been revealed by Kim Kardashian as she shared a hard time with co-parenting.

She is doing it with her ex-husband Kanye West who has created many dramas which also became an obstacle in parenting. They together have four children and the North being the eldest one.

These all things got revealed in an interview through a podcast where Kim Kardashian opened up about getting criticism related to the antisemitic remark of Kanye West.

Their divorce has been finalized on 29 November but when it comes to co-parenting then it is still very hard. She even said of protecting not just the four children but Kanye West as a good parent.

Here is what Kim Kardashian shared about Co-parenting with Kanye West.

In the video, one can easily see Kim Kardashian crying about the difficult way that keeps doing co-parenting. She called it hard. Kim Kardashian has also made a revelation that kids in her house are not aware of the outside world and what is going on there. She continued and said:

“am hanging on by a thread and I know that I am so close to that not happening, but while it is still that way. I will protect that to the end of the earth as long as I can.”

When the question related to Tik Tok videos has been asked by her daughter then Kim Kardashian reacted to it differently. She with her daughter generally makes TikTok video and uploaded them on social media which create a lot of headlines.

Kim Kardashian has also revealed how her daughter uses the phone and only her phone for using her social media account.

When it comes to a full-time job of having her kids then it is related to going through something hard. She has talked about how things become difficult when children want to listen to the song of their father and she can do nothing but put a smile on her face.

She has to act like nothing is happened and everything is okay but as soon as she leaves or dropped them at school then her cry started coming naturally.