Khloe Kardashian was seen in all red as she shared the 1st picture of baby boy! 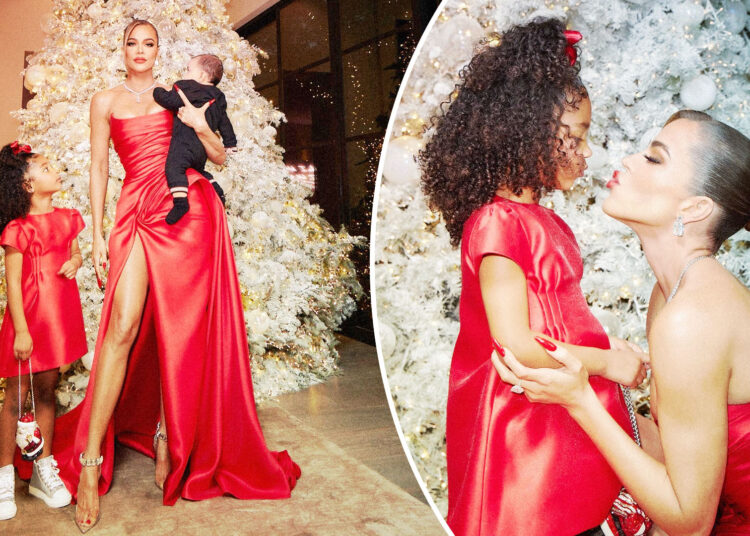 Khloe Kardashian shares the first pictures with her baby boy and daughter True for Christmas. Being very sensitive and protective towards their children because of the presence of media.

Whether it is related to taking pictures or revealing names, everything has become quite confidential. And it is totally up to them when they will decide to reveal the face of their children or keep their names in public. The only reason behind it is to give their child a ground and private life.

The child of Khloe Kardashian is with Tristan Thompson as she also shares a four-year-old daughter with him.

Coming to the first-ever glimpse of Khloe then she was looking stunning as ever in her white gown with a side cut. When it comes to the daughter True then she was also matching with her mother as she was wearing a red dress for Christmas and a red hair band.

Coming to the baby then he was wearing a black blazer and black pants while being in the arms of his mother.

The whole face of the baby was not revealed but half of it was clear to see. The reality star has also broken the silence about this birth through an interview on 30 August 2022.

Khloe Kardashian has talked about having two kids and how it becomes sometimes hard. Motherhood is for her to be a good person in life and it’s an honor for her. She said:

“know it’s cliché, but I love everything, even the hard parts [about being a mom of two]. I [my kids] challenge me as a person, and being able to shape little people into really incredible big people is an honor and a gift,”

Continuing it, Khloe said: “We have to take those roles seriously, especially in today’s day and age, with how much accessibility children have and the information they’re exposed to so young. It’s super scary, but I take my job very seriously. I love it so much.”

True, the four-year-old kid of a reality star is very happy to have a brother as she has got someone to play with. She always gives him kisses and hugs as she tries to adore the baby as much as she can.