The Kardashian-Jenner family threw a lavish Christmas Eve party at Kourtney Kardashian's place and it was a party to remember! 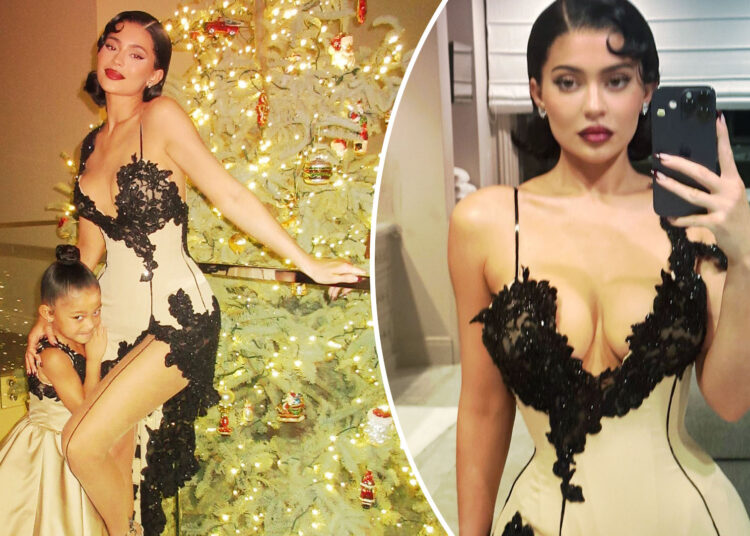 The Kardashian-Jenner Christmas Eve party was full of lavish mommy-and-me moments. Kylie Jenner posted herself in a s*xy Christmas dress on Instagram on December 24, tagging a photograph in her black lace and champagne Mugler dress, “naughty or nice?” She accessorized the high-slit gown with an Old Hollywood-style hairstyle and rich red lips.

While the posture is obviously wicked, we’re leaning with nice based on the heartwarming video Kylie Jenner posted with four-year-old Stormi Webster on her Instagram Stories. Her kid twirls in an identical Mugler garment in the mirror selfie video.

As they prepared for the event, the Kylie Cosmetics creator shared videos and photos of their coordinated costumes on social media. Jenner wore a champagne-colored gown with a low-cut neckline and beaded black lace around the breast and hem, as well as a thigh-high split.

Also Read: Kim Kardashian Is Back With Dark Shade Of Hair For KarJenner Christmas Celebration!

Here you can check out some posts of Kylie Jenner from KarJenner Christmas Eve.

Stormi’s gown was fashioned in a princess style, with lace giving an asymmetrical, one-shoulder effect. The little girl was beaming in her gown, her hair tied up in a top bun. Stormi is Kylie Jenner’s 10-month-old son with Travis Scott, who was previously known as Wolf Webster.

Kylie, 25, shared a mirror image with her kid on Instagram to show off their identical outfits while listening to Eartha Kitt singing “Santa Baby” in 1953.

Kylie and Stormi weren’t the only ones matching at the Kardashian-Jenner bash, which featured blood-red Christmas trees, a children’s ball pit, a piled dessert table, and a full bar.

Khloé Kardashian and True, her six-year-old daughter with Tristan Thompson, both wore red outfits to the event. True topped her red gown with a matching bow, while her mother donned a corsetted red gown with a blood-red lip and diamond necklace.

While Kim Kardashian did not match North West, she did revert to brunette hair for the occasion and uploaded many videos with her eldest daughter on their joint TikTok account.

Kim looked like a walking mirror in a dazzling reflecting gown, while North chose a glittering ensemble. “Christmas Eve celebration will be like…” they captioned one of the videos, which also included Kylie. Kim Kardashian and her ex-husband Kanye West have three other children.

On Saturday, the Kardashian-Jenner Christmas party was held (24 December). Photos and video clips from the celebration show the family looking stunning.

The party was hosted at Kourtney Kardashian Barker’s Calabasas house, which was decorated with red Christmas trees and an all-red ball pit for the kids to play in.

Sia made an appearance at the celebration to perform various celebratory tunes. North West joined Sia in singing “Snowman” and “Chandelier” in a video released to Kim Kardashian’s Instagram Stories.