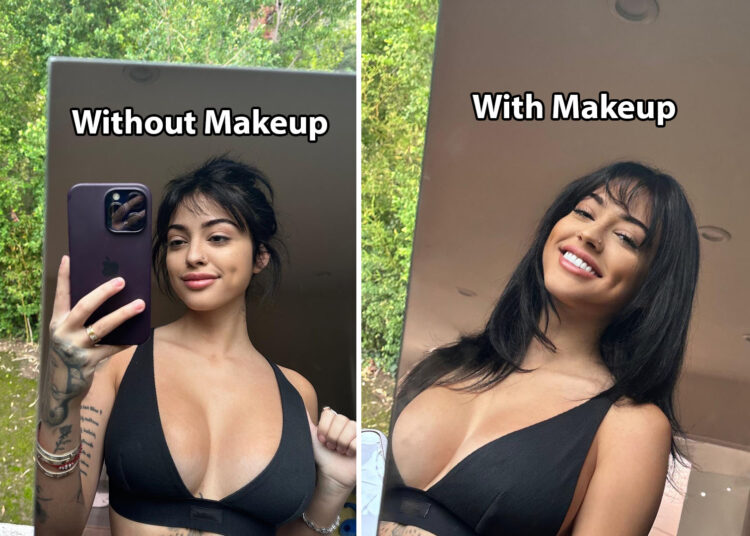 The influencer, Malu Trevejo who rose to fame with her appearances on Musical.ly, decided to share what she looks like with and without makeup, and fans are having trouble telling the difference.

“Bare face, then makeup,” Malu captioned the photos. In the pictures, Malu is wearing her loungewear, including an incredible bralette and jogger combo.

It takes a lot of courage from influencers to show up without makeup and fans decided to support Mala.”Gorgeous either way,” wrote one user. While another added: “bare face >>>>”

The posts come just a day after Malu’s home was allegedly broken into. The star Malu Trevejo went live on Instagram with tears streaming down her face as she claimed that someone had broken into her home and that she knew the perpetrator.

“Look what just happened to me,” she said during the broadcast. “And the fact is, I know who did it too. He broke into my house, and took all my stuff.”

“It’s because the people I’ve worked with in the past have been giving me shit,” she added through tears. “I can’t stay quiet anymore. I’m so tired! I’m so tired. I’ve been trying to hide everything that’s going on but I can’t anymore. I don’t care. I don’t have a manager.”

Here Is How Fans Supported Malu Trevejo on Social Media.

Fans supported the singer after the break-in, with one writing: “I don’t understand why her life keeps getting worse, all she does is be happy but people don’t want that.”

While another added: “she needs to sell that house and move and never give anyone an address where you rest as it breaks my heart for her he trusts.”

Others also encouraged her to move out, stating: “She needs to move and the fact that she lives alone makes her an easy target… I hope she gets to a safer place soon.”