by Om Prakash Kaushal
Reading Time: 4 mins read
A A
0 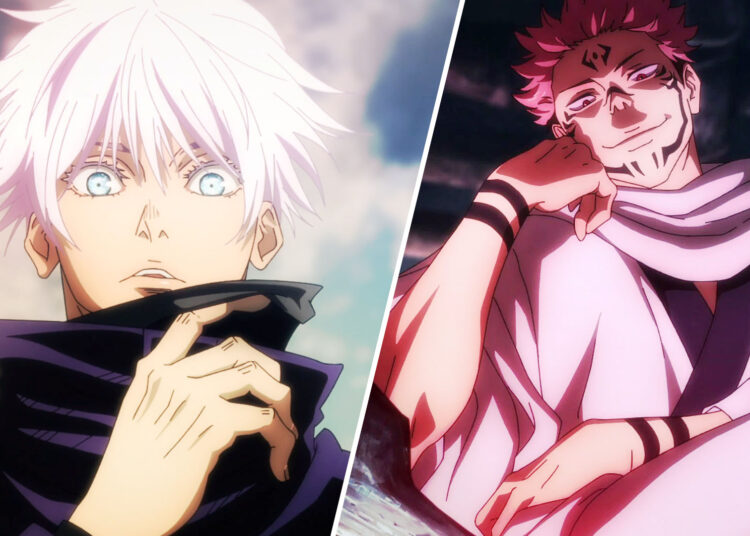 Who will win the battle: Gojo Satoru vs. Ryomen Sukuna? In the Jujutsu universe, which of the two is stronger?

The anime Jujutsu Kaisen, which earned the Best Anime of the Year Award at the Crunchyroll Anime Awards 2021, tells the tale of high school student Itadori Yuuji, who joins a secret organization of sorcerers in an effort to break the fabled demonic curse of Ryomen Sukuna by turning into a demon.

JJK has been determined to be the most streamed anime of 2021, and we can state with certainty that the anime’s exceptional character design and distinctive storyline have contributed to its success and expanding fandom.

Gojo Satoru and Ryomen Sukuna are two of the show’s most intriguing characters. Gojo is the strongest sorcerer in the Jujutsu Universe, while Sukuna is the strongest curse. The two are also the individuals with the most mystery surrounding them.

Even with lots of screen time, not much is revealed about their history or the extent of their skills. The fan base has been going crazy with curiosity because of this element of mystery.

Who is stronger, nevertheless, is a crucial issue that comes to mind when everything is taken into account. Satoru or Gojo?

To save you the trouble of doing the research and taking everything into account, we will thoroughly address these questions in this article.

Right now, it is very obvious that Satoru Gojo is the only sorcerer who can fight the powerful “King of Curses.” But it’s not as straightforward as Gojo defeating Sukuna or vice versa. Keep in mind that Sukuna is so strong that even the most skilled sorcerers would struggle to approach him, even while he is operating at half of his ability.

Not to mention that he has been living for many centuries, so who can say for sure how skilled he is? The final icing on the cake is that Sukuna has grown significantly stronger throughout the years because of his cursed fingers, making him far more powerful than he was during the peak of Jujutsu.

On the other hand, Satoru is the only sorcerer in 400 years to have both the Six Eyes and the Limitless Cursed skill under his belt. He has earned the title of Strongest Jujutsu sorcerer for this reason.

In one of the episodes of Jujutsu Kaisen, Gojo is asked Yuji who would win in a battle between Sukuna and Gojo.

Gojo answers that Sukuna would lose. If the fight came down to who had the best domain expansion tactics, Sukuna’s domain strategy would win.

If Gojo couldn’t cast Infinite Void over Sukuna’s Malevolent Shrine, which was sizable enough to take out a significant chunk of the Shibuya Arc’s terrain, there isn’t much he can accomplish. Additionally, it is impossible to physically harm Gojo because of his Immortality.

Sukuna’s slicing cursed method can also harm Gojo because Eternity is ineffective inside Domains. These statistics suggest that Gojo and Sukuna may be on an equal footing in terms of power.

However, we have only used a small part of their true strength to calculate these straightforward computations. As of right now, none of us are aware of their combined true potential. So, in essence, all we are doing is gambling.

There will undoubtedly be a battle between Ryomen Sukuna and Gojo Satoru. Gojo is thought to be stronger by some admirers, but many others hold the opposite view. With the battle that will undoubtedly occur, we will soon find out who is stronger.

Sukuna is named after the mythological Japanese figure Ryomen-Sukuna, who is thought to be a demonic monster that first appeared in the ancient Hida Province in the fourth century, according to the Nihon Shoki.

He had a two-faced head and a total of eight limbs, four arms, and legs for each face, making him a man of inconceivable power.

Gojo placed third in the Character’s Popularity Poll. In an effort to sharpen his mind, he started eating sweets, which led to the development of a sweet tooth. He is capable of accomplishing anything he sets his mind to. He stays away from getting too involved in anything.