Madelyn Cline shared pictures from 'The Tonight Show Starring Jimmy Fallon' where she went to promote her upcoming film, Glass Onion: A Knives Out Mystery. 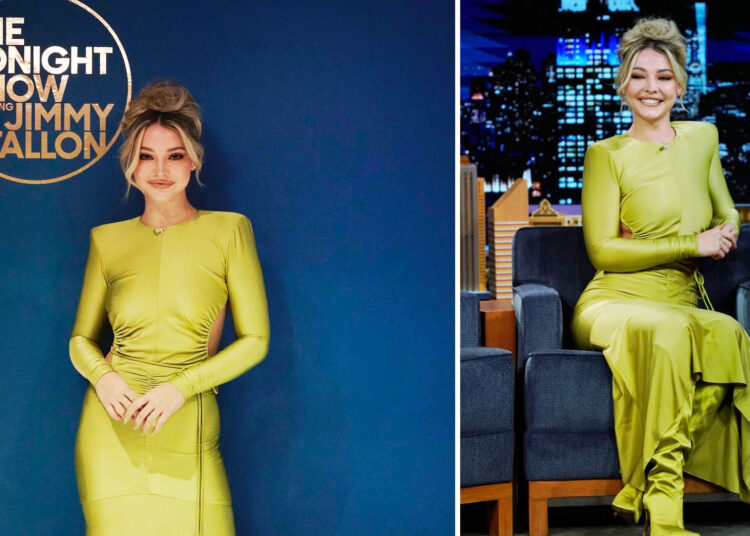 Seems like Madelyn Cline was on ‘The Tonight Show Starring Jimmy Fallon’ a few days back. She recently shared her snaps from the show on Instagram. Scroll down the article to know more about the post.

For those who are not familiar with Madelyn, she’s a 24-year-old actress and model, based in the United States of America. Madelyn has done major roles in films as well as tv and web series.

There are a lot of major roles for Madelyn Cline. She portrayed the role of ‘Sarah Cameron’ in the Netflix original drama series, Outer Banks. This is the role that she’s best known for.

Her other major roles include ‘Tina’ in Stranger Things, ‘Jessica’ in The Originals, ‘Taylor Watts in Vice Principals, and ‘Grace Alexander’ in The Jury.

Madelyn is also known for her major roles in films as well. She portrayed the role of ‘Chloe’ in Boy Erased, ‘Sophia Larocca’ in This Is The Night, and ‘Emily’ in What Breaks The Ice.

She’ll be seen as ‘Whiskey’ in the upcoming movie Glass Onion which is a spin-off of Knives Out, the popular mystery/crime film.

Also Read: Thylane Blondeau Shines In a Seductive Dress With a Thigh-High Slit

Madelyn Cline recently shared her ‘The Tonight Show Starring Jimmy Fallon’ snaps. Check out the post we are talking about.

Madelyn is wearing a green tight dress that looks stunning. Her hair is in this messy bun shape which is adding to the beauty of her dress. The makeup on her snowy skin seems angel-like.

It is evident from the second picture of the post that both Madelyn and Jimmy seem to be enjoying the show.

The caption clearly states that Madelyn was on ‘The Tonight Show Starring Jimmy Fallon‘ to talk about her role ‘Whiskey’ in the upcoming movie, Glass Onion.

Maybe this is why Madelyn shared a picture in the post of a shop hoarding that says ‘Whiskey as Bold as New York.’ The picture in which there are eyelashes floating on the champagne will be relatable for every actress in the industry.