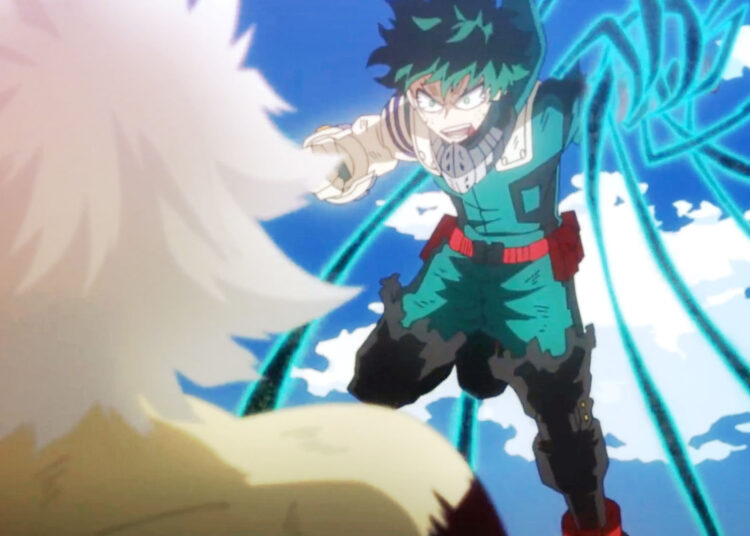 My Hero Academia Season 6 Episode 9 was so loaded with action and excitement that it raced by in a flash. After such a long wait, getting insight into Bakugo’s psyche seems rewarding— it turns out he is more than the nasty, explosive youngster we all believed he was.

So far, this season has had excellent episodes that have left viewers wanting more.

My Hero Academia Season 6 Episode 9, Katsuki Bakugou: Rising, begins with Ryukyu alerting Aizawa that Shigaraki had fired a quirk-destroying bullet at him. But the hero could not avoid the bullet, which struck him in the leg. So, without hesitation, Aizawa slashed his leg off to prevent the bullet’s effect from spreading.

But the hero was too slow, and Shigaraki ran forward to murder him as soon as his quirk stopped working. Even as the villain began tearing Aizawa’s face off, Deku tried to stop him from using Blackwhip while Shoto’s ice drove Shigaraki away from their instructor.

The rampage of Gigantomachia continues.

My Hero Academia’s Season 6 Episode 9 stated that Gigantomachia’s mutation had made the giant almost invincible, and the heroes had resorted to informing the public through news outlets.

Yaoyorozu Momo recognized that they were still alive because the villains didn’t see them as a danger.

Momo told the other students that the sedatives had not worked on the monster, prompting Mineta to question aloud if they had been doomed from the start.

At the battleground in Jaku City, Shoto requested an overheated Endeavor to chill his body with ice. Bakugou protected Gran Torino, while Deku protected Rock Lock and Manual, attempting to stop Aizawa from bleeding out.

Rock Lock ordered an enraged Deku to escape, but he refused, prompting Shigaraki to suggest that he die instead. However, when he attempted to utilize Decay again, his body began to come apart, stunning the villain.

Shigaraki sought to discover why his body was breaking apart in My Hero Academia season 6, episode 9 when he realized he had been awoken before the four-month mark. Deku came to the same conclusion after going through a similar experience after inheriting the great strength of All Might’s quirk for the first time.

The blonde hero-student worried it wouldn’t be long until the secret behind Deku’s peculiarity became known. However, all Might advised that they needed to be cautious since villains didn’t only desire power.

When they started talking about the contents of the OFA wielder’s diary, the conversation took a darker turn. He addressed the retiring hero, knowing he was concealing something.

Bakugou, alarmed by All Might’s silence, attempted to ask whether OFA may endanger Deku’s life. The blonde was concerned that Deku had never cared about himself since they were toddlers, and he revealed that he bullied Deku because he couldn’t comprehend his faults.

All Might be concluded from his confession that Bakugou had volunteered to help the other youngster in his training.

Shigaraki’s body is taken over by All For One.

Episode 9 of My Hero Academia season 6 included All For One’s voice asking Shigaraki to give up control of his body to his mentor. The burnt figure extended its arm towards Deku, calling him “little brother” and doing the same to the OFA bearer.

Bakugou stated in My Hero Academia season 6, episode 9 that his body moved on its own as he pushed Deku out of the path and got stabbed by Shigaraki’s quirk instead.

Episode 9 of My Hero Academia Season 6 was the best episode in the legendary history of the show and a masterwork of character development and storyline. This arc is shaping out to be the best of the show.