Taylor Lautner Finally Married to His Fiance Tay Dome In A Private Ceremony!

The Twilight famed actor Taylor Lautner got married to his lady love in private ceremony! 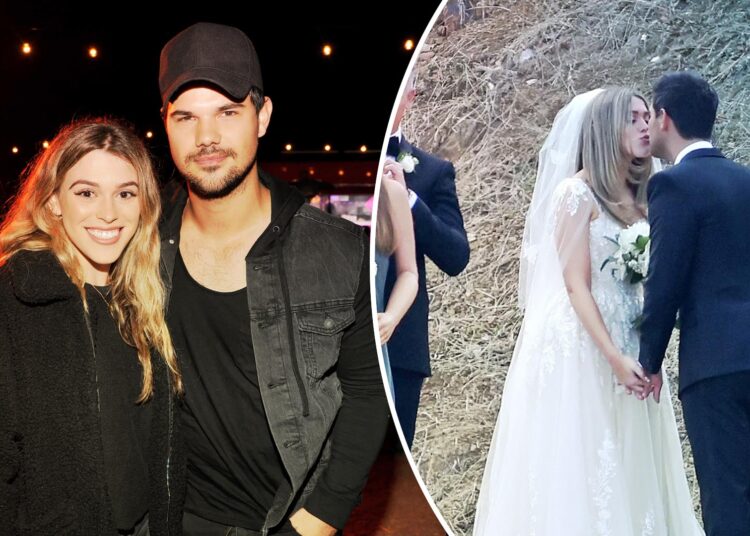 I hope you remember this actor from Twilight, he is no more the most wanted bachelor now, the news has come across that Taylor Lautner is married to fiance Tay Dome.

2022 is a remarkable year for a lot of things, especially in the life of celebrities. Some celebrities have got their career breakthrough projects while others started their new life with their partner or as a parent.

If it talks about those who decided to get married and settle in life then a lot of big names come on the list. Among them is Twilight’s famed actor named Taylor Lautner who recently got married to his long-time girlfriend named Tay Dome.

The 30-year-old actor Taylor Lautner is no more bachelor as he decided to marry his girlfriend Tay Dome. He is right now officially married on Saturday 12 November 2022. The marriage happened in California as a couple was seen kissing each other. This celebrity couple has decided to keep it very private and that’s the reason why beforehand announcement of marriage had not happened.

Coming to the bride then she was seen wearing a white dress with a sleeveless skirt and floral design. The bride was also having a traditional sheer veil. Coming to the actor, Taylor Lautner was seen in a black suit or black tuxedo.

Also Read: Kylie Jenner Was Seen Only In Bra Before Going to CDFA Awards

Here you can check out some pictures of Taylor Lautner and Tay Dome’s Wedding.

It was recently when the actor has spoken about his fiance and how she is going to get his name and both would be Taylor Lautner. The actor has said that they are going to be the same person by the name in the Clarkson interview.

He also talked about whether he is going to keep it super simple or super complicated. But when it comes to the current scenario then they both are going to separate each other’s names as his wife will have Tay instead of Taylor.

The couple announced their engagement in November 2021. The actor has written about how he cannot wait to spend his forever life with his best friend. In the pictures, we can see Tay Dome surrounded by roses and candles. Coming to the reaction of his then-girlfriend and now wife then she said all of her wishes are finally true.

The actor Taylor Lautner first started the rumors when they both were seen together in September 2018, somewhere nearby Halloween.

The actor has decided not to hide his feeling away and kept them official on social media. When Tay Dome turned 23 then Taylor Lautner decided to come on Instagram and shared a beautiful caption, wishing her happy birthday and calling her an unbelievable human. He also said and expressed his gratitude towards his girlfriend.