After many controversies, Kim Kardashian revealed wearing the actual dress of Marilyn Monroe for ten minutes at Gala! 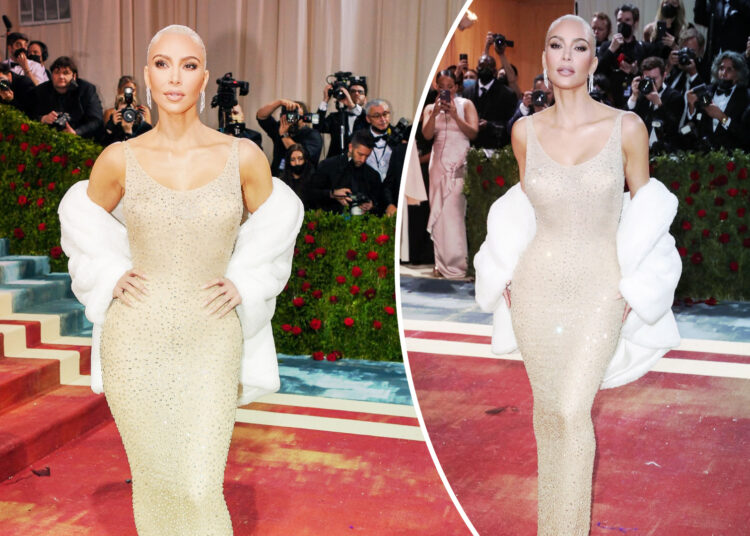 Kim Kardashian was spotted wearing Marilyn Monroe Dress at Met Gala 2022, and that has become a statement of controversy.

Rumors like tearing the dress apart and not fitting well were going everywhere. But when it comes to Kim Kardashian then she recently revealed that she only wore the actual dress of Marilyn Monroe for just 10 minutes at the Met Gala.

The 41-year-old reality star Kim Kardashian recently revealed one of the most controversial fashion statements.

Due to many rumors surrounding her related to wearing Marilyn Monroe‘s dress, the reality star finally came forward. The iconic dress that she wear at the 2022 Met Gala was just for 10 minutes.

Also Read: Britney Spears Responded to Millie Bobby Brown for Wanting to Play Her in a Biopic

Here you can check out what Kim Kardashian said about wearing Marilyn Monroe’s Dress At Met Gala For 10 Minutes!

When Kim found out that she did not fit well in the iconic dress of Marilyn Monroe then she took the help of a mother and flew to Florida for another chance. These things got revealed on 10 November in the reality show called The Kardashians.

Kardashian had to follow a strict diet just to get into the dress of an icon. She said into the dress finally but decided not to stop working out. With 4 days until the Met Gala, Kim Kardashian was working very hard on the dress. She then went through one of the most tedious processes of changing her hairstyle and hair color.

The reality star said: “When I thought to go in Marilyn Monroe’s dress and I knew how precious and fragile the dress was, I knew I had to lose at least 10 pounds for it to even go up.”

She further added: “It feels exhausting, but it’s like a movie role. Do you know how an actor will lose weight or gain weight for roles? It feels like my role is Marilyn Monroe. I’m determined.”

Kim Kardashian then had a conversation with her glam team as well as the producer about the event. She decided not to get ready in the hotel because she is not able to wear the dress to the gala during the car ride. So that’s the reason why her entire team had to manage to get her in the dress before the red carpet.

The reality star said they were putting a dress almost on the red carpet because she was not able to set in the car. Since the dress was very sensitive, she cannot risk it. It was also related to what if someone will touch her with oily hands and their dress will have oil on it. And if it happen then she lost almost everything.

She wore the dress for 10 minutes on the red carpet then later on she changed into one of the replica dresses to attend the whole Met Gala. So she never tore the dress or kept the dress in any harm.