Hailey Bieber was seen in all red hair amid her meeting with Selena Gomez at the Gala! 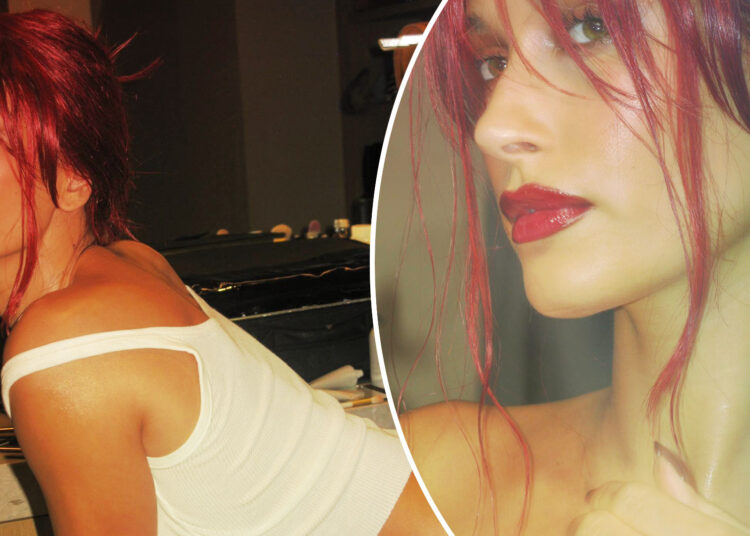 It seems everything is going well and well with both the celebs Selena Gomez and Hailey Bieber. As they both look like best friends forever at the Gala event. It is very obvious to see celebrities changing their look from time to time according to their need.

Sometimes it is related to their personal choice while other times it’s their professional that makes them do this.

Whether it is related to changing the hairstyle or getting a whole new look by changing the fashion sense or changing diet, everything has contributed to the best.

Something like this happened with many celebrities who were seen in a new avatar. Among them is Hailey Bieber who was recently seen in a new hairstyle after meeting Selena Gomez.

Here you can check out Hailey Bieber’s New Hairstyle.

The 25-year-old model Hailey Bieber was looking stunning as ever in her recent Instagram photos. In the photos, we can see her changing her brown hair to new dark red hair. She shared these pictures on 15 October 2022 where the model shared pictures of long hair hanging down the side of her face.

In the pictures, we can see her wearing a tank top with white color and red glossy lipstick. Her lipstick was somehow matching to her hair which was also red and shining bright. The model has uploaded a series of pictures in which the second photo was the closer. We have seen her glossy makeup that was looking appropriate with her new hairstyle.

The model has also uploaded a video where she was applying gloss on her lips and giving a little touch to her hair.

In the caption, Hailey Bieber has written that she is having too much fun and added some funky emojis. Just after the post, a lot of fans came in front and responded with some compliments. One fan said that red suits her while others said she is the queen of Halloween. Some appreciated her whole look while others focused just on the hair.

Coming to the recent headlines that were made by Hailey Bieber then it was related to her meeting the ex-girlfriend of her husband, Selena Gomez. Two of them came together for Academy Museum’s Gala. It happened on Sunday when they both were seen posing together.

We have seen Hailey Bieber in her regular brown hair while she was looking beautiful as ever in a cut-out waist dress. This coming together has proved everyone wrong who said that both the beauties are not getting along due to the drama over Justin Bieber.

Selena Gomez and Justin Bieber dated for many years but got broke up in March 2018. Soon after Justin Bieber started dating Hailey Bieber and got married to her in September 2018.