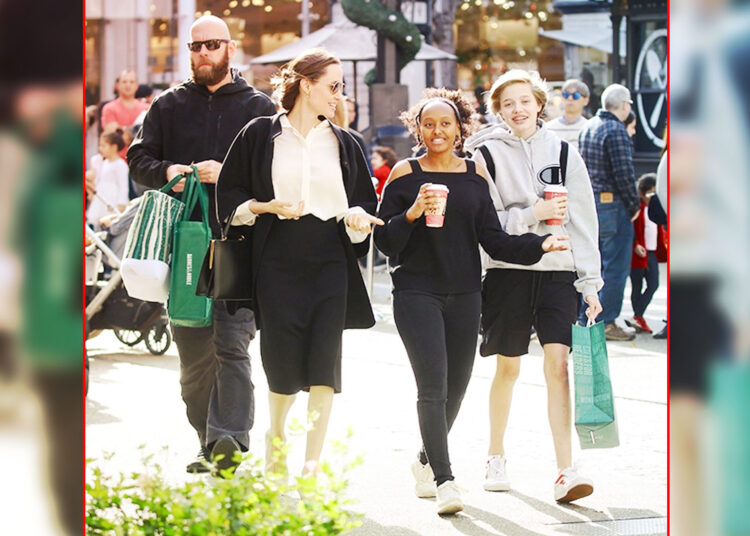 Angelina Jolie Update: It is very hard for some celebrities to go with certain things in their life that they have never imagined. And if it is related to their life then it is pretty sure that a lot of news is going to come their way. Something like this happens with some celebrities who are going through a rough time, especially in their personal life. Among them is the actress Angelina Jolie who was recently seen with her 17-year-old daughter Zahara after accusing Brad Pitt of violence.

The 47-year-old actress was recently seen with her 17-year-old daughter Zahara. They both were seen during an outing that happened on 4 October 2022 in New York City. Coming to look then the actress was wearing a black coat that was matching well with black trousers. She was also wearing open sandals.

Despite having rainy weather, Angelina Jolie decided to wear sunglasses while going out with her daughter. She was also seen wearing a gold earring that was matching well with the dress while her hair was in a bun.

Angelina Jolie Was Recently Seen With Her Daughter Zahara

Coming to Zahara then she has recently started college in Georgia around 2 months ago. She has kept her look very casual with blue jeans and a grey t-shirt. She was also wearing a jacket that was appropriately fitting well. She was seen in white sneakers and carried a black backpack of leather.

This outing of mother and daughter came after Angelina Jolie accused her ex-husband Brad Pitt of violence. According to the reports and the papers submitted to the court, Brad Pitt has done some violence to the children while being on a flight. The actor of Once Upon a Time in Hollywood has done some physical and emotional abuse where pushing Angelina Jolie towards the wall and kicking the ceiling of the plane many times.

“Her story is constantly evolving. She had the opportunity to share information with law enforcement who made the decision not to press charges following their investigation.

She had the chance to share this during the lengthy custody trial, which resulted in the judge granting 50-50 custody to Pitt following in-depth observations and analysis by doctors, therapists, and other experts. She and her team go back to the same thing month after month with new and false information.”

Coming to the couple then they were married in 2014 but finalized their divorce after some years of marriage in 2019. They have 6 children together who are right now staying with Angelina Jolie.