Kylie Jenner was seen in blue mini dress as she was there to support her friend Bella Hadid! 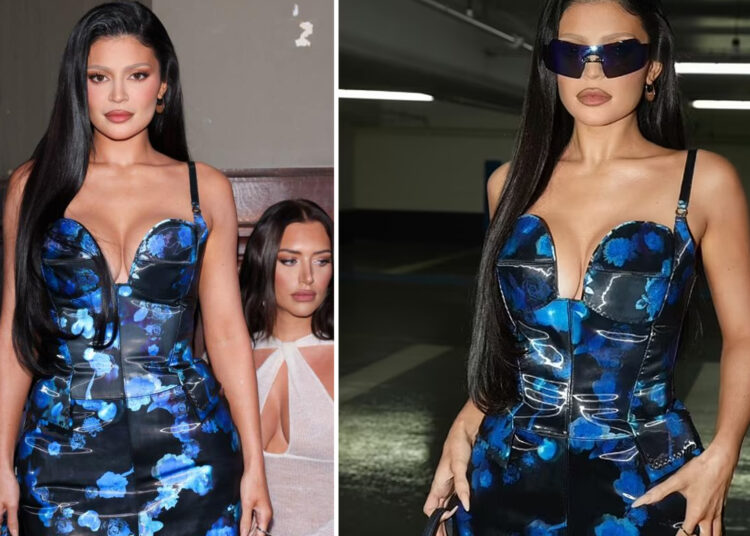 Kylie Jenner Update: There is a lot of fashion show that is going on right now and that is the reason why we have seen a lot of celebrities giving their best to these fashion shows apart from all these things, to many events.

The 25-year-old Kylie Jenner was looking very beautiful as she was seen in Paris Fashion Week. It was on 30 September when the reality star and model was photographed in a blue dress that was enhancing her body. She was there to support her friend Bella Hadid the backstage at Coperni Show.

Coming to the dress then it was full of blue color as we can see light blue droplets as well as graphic dark blue in the dress. It has a very attractive neckline that was showing of her cleavage. Kylie Jenner was matching the whole dress with heels and a handbag that was matching with the dress. Her long hair was totally attractive and appropriate for her whole look.

Kylie Jenner was seen having a backstage chat with the model and friend Bella Hadid. Coming to the model then she got all her attention as she was wearing a dress that was looking beautiful on her. While walking on the stage, Bella Hadid stood with men who applied some white material to her body, and later on, the dress turned into an off-shoulder white gown.

It is not the first time when Kylie Jenner has got all the attention because of her looks. It was a few days ago when she was seen in Paris Fashion Week wearing a long gown with silk material. That dress was also matching with her body shape and enhanced it.

It was just a few days ago when Kylie Jenner was seen in a blue velvet gown while attending the French Fashion House. The neckline was reaching to her belly bottom while her cleavage was center front.

It is now assured that no one can match Kylie Jenner when it comes to fashion and the same goes with the model Bella Hadid.

They both have their unique fashion. Coming the sister of the model, that is Gigi Hadid then she is right now in talk related to being in a relationship with Leonardo DiCaprio. According to the source, Bella Hadid has not any problem with the relationship that is right now gaining any attention.