Bella Hadid gets a dress sprayed on her body during a catwalk show at Paris Fashion Week. Viral video 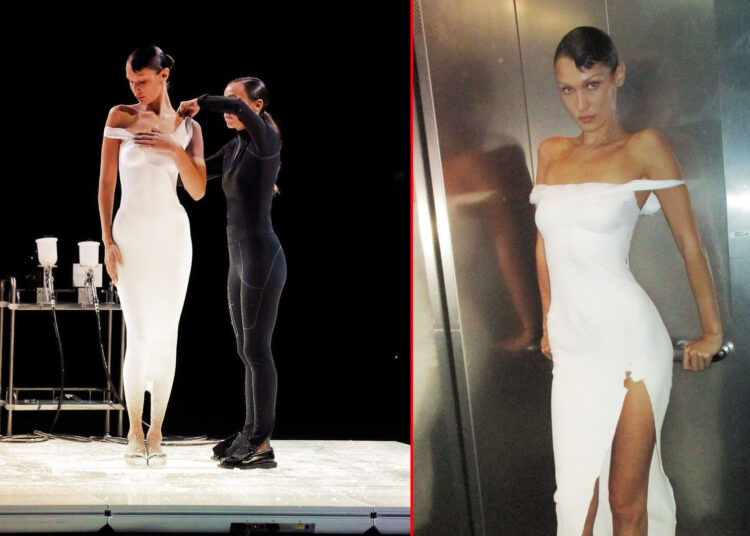 Bella Hadid gets a dress sprayed on her body during a catwalk show at Paris Fashion Week. Viral video Bella Hadid stepped out in nothing but n*de underwear before being body-sprayed in a white dress. Pictures and videos of the spray-painted dresses have flooded social media platforms.

The definition of fashion also changes with time. Actresses and models are becoming bold every day in the name of fashion. This time an actress did something on the ramp that left everyone stunned.

Bella Hadid walked the runway in a breathtaking Coperni fashion show at Paris Fashion Week and gave the fashion police a moment that will surely go down in the pages of fashion history.

The supermodel stepped out in nothing but bare underwear before her body was sprayed with a silver-white dress. Pictures and videos of the spray-painted dresses have flooded social media platforms.

Also Read: Kendall Jenner Flashed A Huge Scorpion Tattoo On Her Bum In A Revealing Bikini

Here you can have a look at some recent posts of Bella Hadid.

The 25-year-old model appeared on the runway totally nude but in underwear and heels, covering her breasts while a team of three men sprayed the dress onto her body, Page Six reported.

According to a report, the dress was made of Fabricant, a sprayed material that hardens into a wearable textile. Technicians sprayed the fabric over her body in the shape of a dress, and after careful fitting, Bella walked the runway in a silver off-shoulder dress with a thigh-high slit.

Bella has been taking everyone’s catwalk by storm this month, hitting the runway for Victoria Beckham earlier in the day and walking the Isabel Marant fashion show with sister Gigi Hadid on Thursday.

She also appeared in London for Burberry earlier this week and previously in Milan and New York. Coperni is known for bold styles, with the brand going viral in April for their hand-blown glass handbag worn by Kylie Jenner and Doja Cat.