Mrunal Thakur Stunned Everyone With Her Unique Outfit At The Filmfare Awards.

The Jersey actress is known for having a solid fashion game and she just proved it why. 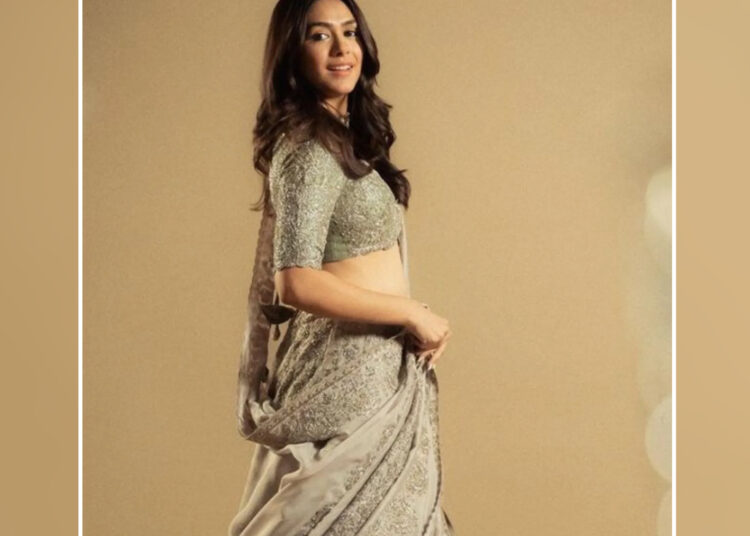 Mrunal Thakur has been stealing all the headlines these days, the beautiful actress has had a great past few years in the Bollywood industry and now she has even entered into the South Indian film industry and her change has resulted quite fruitful as her Telugu debut movie Sita Ramam was declared a critical and commercial hit and the movie has grossed around 80 crores at the box office collections, and now that the movie is about to be released in Hindi, it is surely going to cross 100 crore mark.

Mrunal who is having an amazing run in the film industry started her career in the television industry and her debut came with Star Plus show Mujhse Kuchh Kehti…Yeh Khamoshiyaan, the show didn’t gain much love from fans, later in 2014-16 she was featured in Zee Tv’s show Kumkum Bhagya which was a super hit show and topped the Trp charts and Mrunal’s career took off after that.

After doing a few other shows and a Marathi film, Mrunal finally made her debut in 2018 in Bollywood with the movie Love Sonia. The debut didn’t help Mrunal as the film went unnoticed but finally in 2019, she got a role in Super 30 and the film was a commercial success.

Now that Mrunal has established herself as a full-time actress in the film industry, she always manages to get the attention of the fans with every opportunity she gets, she recently appeared at the Filmfare awards 2022 in a rocking black Tuxedo, the outfit was designed by Rohit Gandhi Rahul Khanna.

Mrunal’s unique outfit got huge compliments from fans and fellow artists, the single-breasted blazer was paired with a white shirt and loose pants, and a bow tie to complete the look, she also wore black stilettos to match her outfit. The whole attire was quite a unique choice by her stylist Rahul Vijay.

For makeup, Mrunal came up with plenty of eye shadows, pink lips, mascara-laden lashes, and black nail paint, we were truly mesmerized by Mrunal’s experiment with style. Meanwhile, on the work front, Mrunal is currently working on Umesha Shukla’s directorial film Aankh Micholi, with Pippa alongside Ishan Khattar, Gumrah with Aditya Roy Kapoor and Pooja Meri Jaan is also in the kitty for the next year.