Kim Kardashian Left A Cryptic Message After 2 Weeks Of Breakup With Pete Davidson!

Kim Kardashian left a very cryptic message that was indirectly hinted towards her break-up with Pete Davidson! 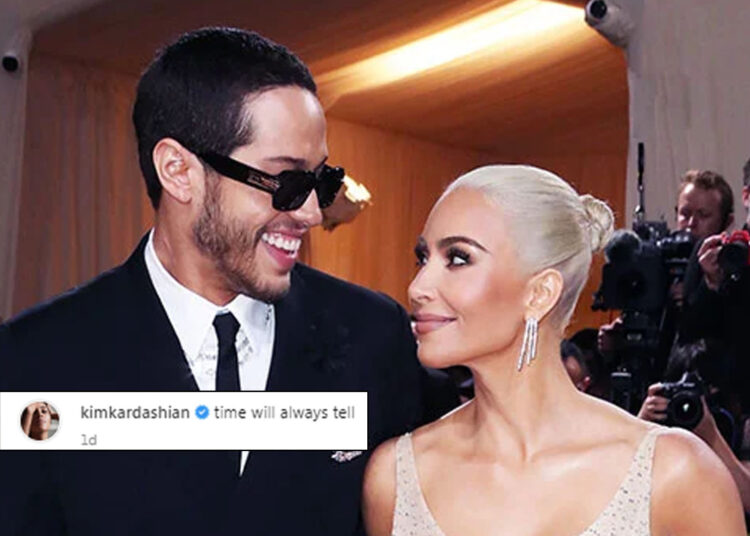 As we’re well aware Kim Kardashian break up with Pete Davidson and now she is planning to get back with Kanye West.

Breakup is something that has affected people the most. Whether it is a common person or a celebrity, it changed the perspective of their life and that is what they reflect through their post.

We have seen a lot of celebrities posting or hinting about their break-up through some photos and words that were written on social media. And if we talk about any recent one then it is Kim  who has written a very cryptic message after her breakup with Pete Davidson.

Also Read: How Pete Davidson is Feeling after Breaking up with Kim Kardashian?

Here you can check out the Recent post of Kim Kardashian

We know that Kim Kardashian and Pete Davidson are no more a couple and that is the reason why Kim Kardashian came on Instagram and has written a cryptic message. This message came after 2 weeks of their breakup. Even though she has posted a cryptic message but still she looks unbothered by all the things that happened around her.

She has captioned some of her Instagram posts as “time will always tell”. A lot of fans are referring to this caption as her breakup and calling it a cryptic message. Kim Kardashian has not accepted it publicly and that is the reason she came on social media and wrote these words.

The news of their breakup came on 5 August 2022 after a few days when Kim Kardashian visited Australia. Coming to her look then she was wearing a leather coat and having a tank top over her body with a skirt. She was seen on her bathroom sink counter and wearing grey boots. Completing her look appropriately, she went with minimal makeup.

The blonde hair of Kim Kardashian is making a different way of fashion and a lot of people have started copying it. Whatever she is wearing, whenever she is going, her blonde hair is highlighted everywhere.

Coming to her break-up then was a most unexpected thing not just for fans but also for friends. According to some sources, everything was going so well between these two but suddenly they decided to separate. The reason behind their separation is not clear but it is sure that they are not feeling that hard and moved on very quickly.

After the post of Kim Kardashian and her cryptic message, a lot of fans came on social media and commented on her post. Some said that she maintain everything while others appreciated her hair and look. A lot of people have even agreed with the message of Kim Kardashian.

The breakup of Kim Kardashian came after 9 months of dating. They both started dating is other in October 2021. They have events spend a lot of time together and went on trips. Their love was glorified and it can be seen through some of their tattoos of Davidson that were dedicated to Kim Kardashian.