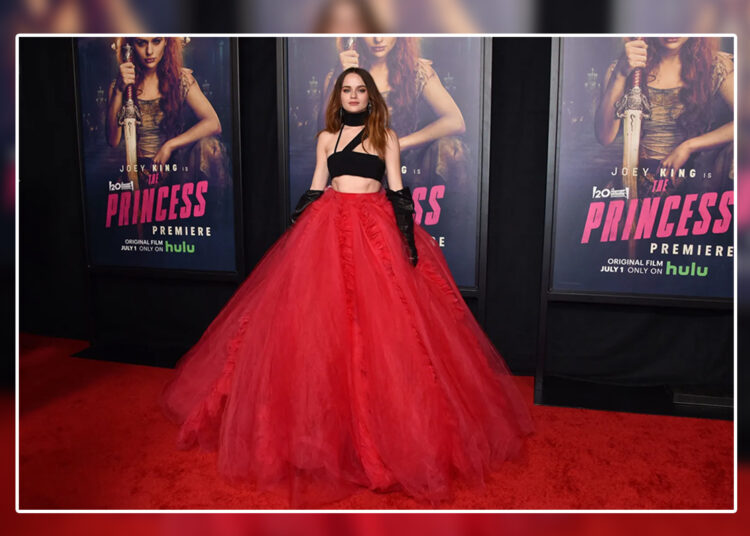 Joey King threw a dramatic fit to celebrate the premiere of her new Hulu series. Joey appeared to channel goth royalty while attending a screening of the upcoming Princess film.

The former Kissing Booth star wore a red tulle cascading skirt and an asymmetrical cropped top from Christian Siriano’s Pre-Fall 2022 collection. On Instagram, she joked that the bright red skirt was “made from the blood of my enemies.”

Joey wore her hair in loose waves for the evening’s glam. Her makeup palette was mostly neutral, with the exception of a soft pink lip. Joey’s makeup artist for the evening, Allan Avendano, shared photos of her gown on Instagram, highlighting its extreme billowing nature. She was able to fit her tulle into a car, but only after making a few amusing faces.

Joey King wasn’t the only one having fun with her ‘fits in this premiere. At a February 2022 premiere, she wore a nude outfit with a lot of sparkles and head-to-toe blue. In an interview, the makers of the movie said that audiences that like action movies are going to love the movie

The Princess will be available on Hulu on July 1. According to Hulu, “when a beautiful, strong-willed princess refuses to marry the cruel sociopath to whom she is betrothed, she is kidnapped and imprisoned in a remote tower of her father’s castle.” With her father’s throne threatened by a scorned, vindictive suitor, the princess must protect her family and save the kingdom.”

Joey King Wishes her Grandma a Happy Birthday on Instagram