Nora scorched the internet by donning a blue-velvet slit gown. She was spotted on the sets of Dance Deewane Juniors. Tune in to know more! 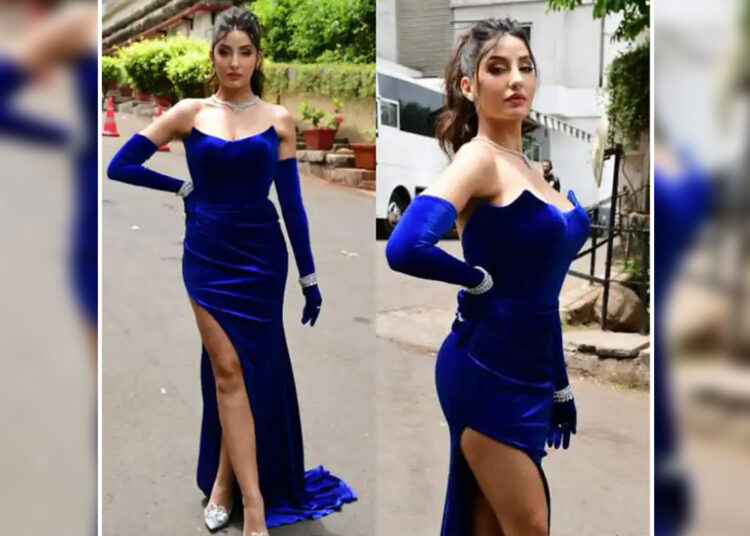 Nora Fatehi Update: An expert in the art of swoon, Nora Fatehi never disappoints us with her suave fashion choices. But, folks, you also wouldn’t deny that Nora Fatehi is one actress who is supremely capable of sporting glam attire; no one else does it better.

Girls, if you are pondering upon which outfit to wear to your night party, taking out a leaf from Nora’s book can help. Recently, Nora scorched the internet by donning a blue-velvet slit gown. Nora Fatehi was spotted on the sets of Dance Deewane Juniors.

For the unversed, Nora Fatehi is seen as a judge on the dance reality Tv show Dance Deewane Juniors. Bollywood’s yesteryear’s diva, Neetu Kapoor, also judges along with Marzi Pestonji.

Some talked about the uncanny resemblance of Nora’s blue-velvet ensemble to the old Hollywood glamour dresses. But what vintage Hollywood gown is complete without gloves or style sleeves?

The uncrowned dancing queen of Bollywood, Nora, has been featured in several item songs, but her impeccable talent helped her bag an acting role in ‘Bhuj: The Pride of India’.

Lately, the tinsel town of Bollywood got filled with the murmurs of her dating the ace choreographer, Terence Lewis. However, in an interview, Terence dispelled all the rumors of their relationship, claiming they both are only good friends. The Canadian model and dancer enjoy a colossal fan following of 40.2 million followers on Instagram.

Nora Fatehi: On the Work Front

Besides this, the 30-year-old dancer has been featured in a handful of music videos. ‘Dance Meri Raani,’ ‘ Naach Meri Raani,”Pepeta’ , ‘Pachtaaoge’ and ‘Chor Denge’ are some of her hit music videos that has garnered a million views on YouTube.

As per the reports, Nora Fatehi has bagged another item song opposite Sidharth Malhotra in the upcoming comedy movie, Thank God. Thank God also features Ajay Devgn and Rakul Preet Singh in the lead roles.