Shehnaaz Gill has give a surprise visit to Georgia Andriani on her birthday. It was seeing that they both were enjoying a lot Georgia is cutting a cake and they both were seen clicking snaps together. 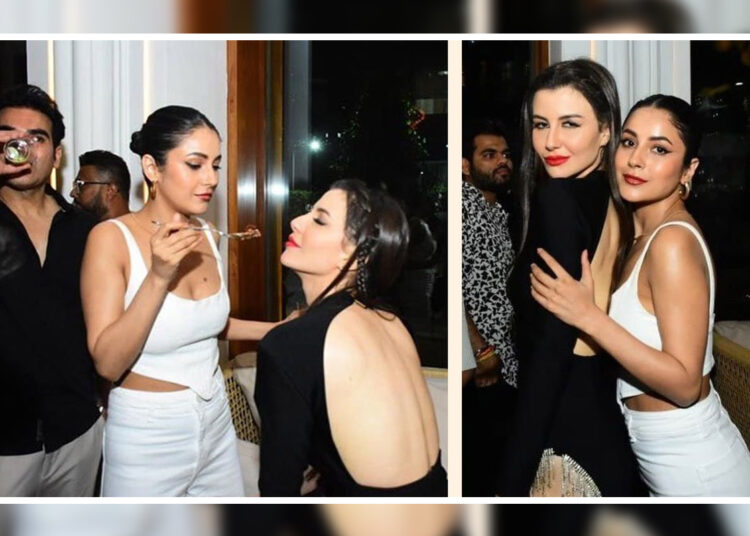 Shehnaaz Gill is a Punjabi model and actress first. She was a very famous Punjabi model and she saw in Punjabi Hit movies like:- Dakka with Gippy Grewal and Honsla Rakh with Diljit Dosanjh. Firstly she is very well known in Punjab Only. She is seen in the show Bigg Boss she made the image very cool and funny girl, now everyone knows who is Shahnaz Gill.

She is in the top three runners of the show. Her Bond is very strong with Late Siddarth Shukla in the show. Siddarth is the winner of the show but unfortunately, he died last year because of a heart attack. Siddarth is her Best Friend, it was said that they were dating each other outside the house but there is no confirmation regarding this.

When Siddarth died it was a very tough time for her she cried a lot and she has not to post anything on her social media approx. for 1 Month after the death of Siddharth Shukla. But as we know time is a great healer she will be getting normal with the passage of time but the memories with Siddarth are never forgettable for her we have no idea from which situation she goes through.

So after Bigg Boss, she has worked with some new brands as well. Nowadays she is shooting for her first big-budget Bollywood movie with Salman Khan. It was her debut in Bollywood and it is such a great push start for her career with Salman khan.

A few days ago she was seen at the Iftar Party of Salman Khan. She was in the Headlines because of her baseless humor or her funky nature. It was very exciting for us when she give a surprise visit to Georgia Andriani on her Birthday.

She has wear a monochrome white co-ords set, she sported a white corset crop paired with matching pants and golden hoops, and brown heels to wrap up her elegant look.

She was seeing a very fun time on her Birthday cutting the cake of Georgia Andriani and clicking snaps with her and wishing her Happy Birthday and giving her Blessings. It was also seen that she is in the conversation with Arbaaz Khan.