In one of her recent stories posted on Instagram, Katrina Kaif shared a menu card for the pre-brunch birthday meal of hubby Vicky Kaushal. 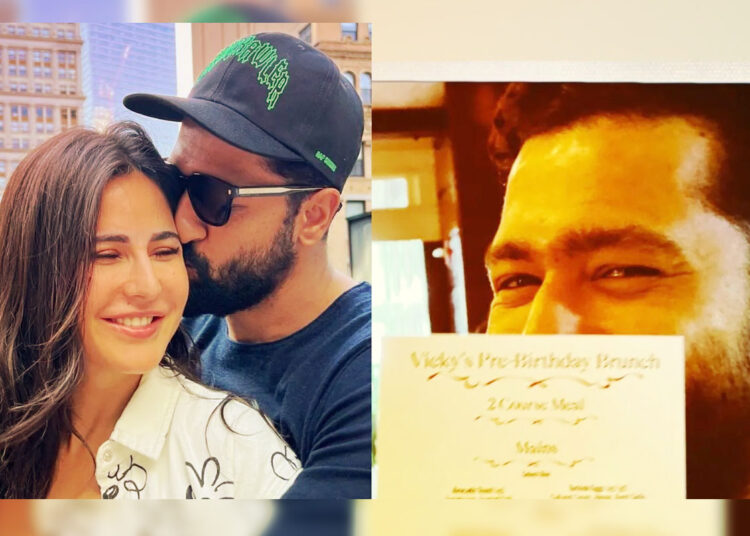 Touted as B-Town’s A-listed actor Vicky Kaushal celebrated his 34th birthday on 16th May. But pictures from his birthday bash have created a buzz among the netizens. Recently a photo shared by Katrina Kaif has been doing rounds on social media.

In one of her recent stories posted on Instagram, Katrina Kaif shared a menu card for the pre-brunch birthday meal of hubby Vicky Kaushal.

Vicky Kaushal is holding the menu card, and the card reads “Vicky’s Pre-Birthday brunch”. But, folks, you are mistaken if you think the menu card is ordinary.

Vicky’s Pre-Birthday brunch menu card was made exclusively for him. If you pay attention closely, you will notice the brunch consisted of a two-course meal. The first meal is the main course and the second one is the dessert.

Katrina Kaif and Vicky Kaushal make us believe that true love exists. The couple never ceases a moment to turn heads. You would also agree that it is hard to lay your eyes off the couple.

Hordes of celebrities and fans chimed into the comment section and wished Vicky Kaushal on his special day. But everyone waited for the special birthday wishes from wifey Katrina Kaif. Instead of penning down a lengthy message on Vicky’s birthday, Katrina wrote that he makes everything better.

Talking about their professional lives, both Vicky and Katrina have bagged some interesting upcoming projects. Vicky Kaushal has one biopic in the pipeline on the work front, titled Sam Bahadur. In addition, he will be featured in the forthcoming project, Govinda Mera Naam, opposite two B-town divas, Kiara Advani and Bhumi Pednekar.

Coming to the gorgeous Katrina, Kaif has a handful of upcoming projects in her kitty. Katrina Kaif would be joining the cast of Tiger 3 opposite Salman Khan. Besides this, we will witness Katrina in a horror-comedy ‘Phone Bhoot’ slated to release this year. Phone Bhoot also features Siddhant Chaturvedi and Ishan Khatter in the lead roles.

Despite this, the fans eagerly long for the duo to share the screen for the first time. According to the hearsay, Vicky Kaushal might join hands with the cast of Jee Le Zaraa opposite Katrina Kaif.

Will Vicky Kaushal would star opposite Katrina Kaif in Jee Le Zaraa? Time will tell. Till then, we must hold our horses back and wait for the official confirmation.

Katrina Kaif & Vicky Kaushal To Appear Together In An ad? Click to know more!