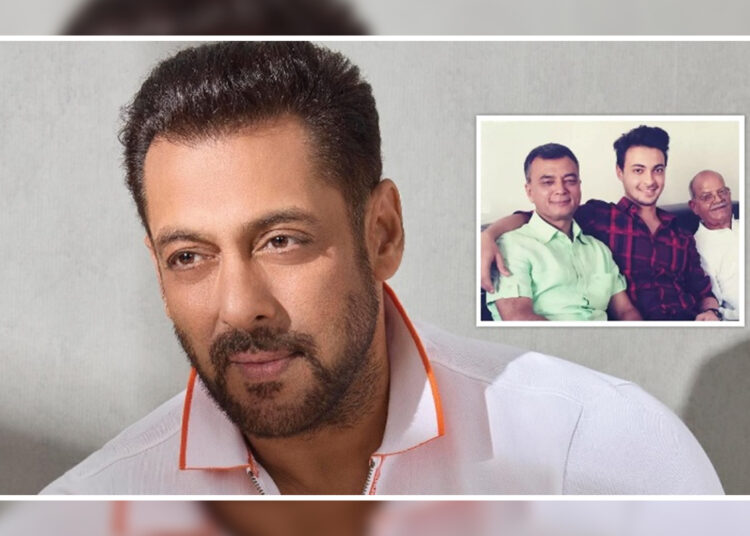 Salman Khan has 2 younger brothers Arbaaz Khan and Sohail Khan, he also has 2 younger sisters Alvira Khan Agnihotri and Arpita Khan. Although Arpita Khan is an adopted sister Salman loves her the most.

On 18th November 2014, Arpita Khan married her long-time love Aayush Sharma and has 2 kids Ahil Shama and Ayat Sharma. They are one of the cutest couples in Bollywood.

Yesterday, it was reported that Aayush Sharma’s Grandfather Pandit Sukh Ram passed away due to his decline in health. Aayush took up his social media handle and updated saying “with a very heavy heart I bid farewell to my beloved Dadaji Pandit Sukh Ram Sharma.

Even though you’re gone, I know you’ll always be with me, guiding me, looking over me, and blessing me like you always do. Rest in peace dadaji, you will be dearly missed.”

Even Superstar Salman Khan posted a picture of the late Sukh Ram with a caption saying “Sending my heartfelt condolences to Ayush and his entire family on the loss of his grandfather Shri Sukhram Ji today. #RIP”

Aayush’s Grandfather’s health rapidly started to decrease after suffering a brain stroke and he was airlifted to Delhi last weekend. A few days back there were rumors about the demise of his Grandfather but Aayush cleared the rumors and said all those were fake.

Aayush Sharma made his acting debut with Loveyatri along with Warina Hussain in the year 2018. In 2020, he was a part of Music Video Manjha sung by Vishal Mishra along with Saree Manjerekar as the female lead. He showed his true potential in Antrim which was released in 2021.

Soon he will be seen in Kwatha and Kabhi Eid Kabhi Diwali.