Check-out Tammanah's new soaring look as she clicked in her Black Dress. 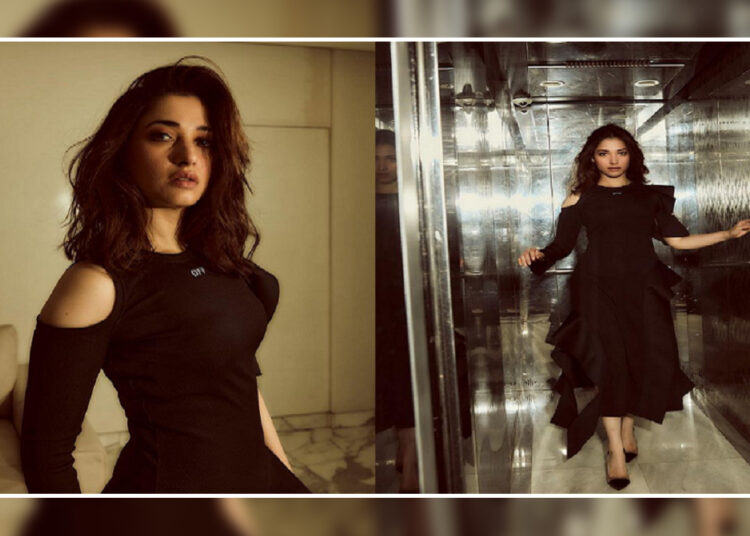 Tamanna Bhatia is famously known as Tamannah born on 21st December 1989 in Maharashtra. She mostly appears in Telugu, Tamil, and Hindi Movies.

In 2005 she made her debut in hindi movie Chand Sa Roshan Chehra and also been a part of music album Lafzon ko from the album Aapka Abhijeet. In the same year, she made her Telugu debut with Sri, and the following year in the Tamil film Kedi.

She also has been part of the Bahubali series and played a crucial role in it. She has acted in more than 65 movies in 3 languages.

She made her Hindi debut as a lead actress in Sajid Khan’s Himmatwala, the movie failed miserably. She again worked with Sajid khan in 2014 for the movie Humshakals which was a multi-starrer movie, again the movie received negative reviews and failed.

She is one of the most beautiful and talented actresses to come across.

Recently she was spotted wearing a completely black dress and was looking stunning, she never hesitates from trying new looks and as usual, she owned the style. One cannot take their eyes off looking at her beauty. She can ace any look with perfection whether it may be Photoshoot, Casual outing, or any project-related.

She was seen in Mumbai wearing a black maxi dress with Ruffles at the bottom and a figure-hugging A-line Silhouette which is completely divine. She had minimal Makeup and she happily posed for the media.

The actress completely stole the limelight, she completed the starry night look with minimal makeup and had no accessories.

On the other hand, she will be seen in Anil Ravipudi’s Comedy movie F3: Fun and Frustration which is the sequel to the 2019 movie F2: Fun and Frustration. The movie is set to release on 27th May 2022. The trailer looks promising and the fans are really excited to see her again on the screen.