Adam Sandler starrer Hustle will be releasing on 10th June 2022. Till then you can watch these movies. 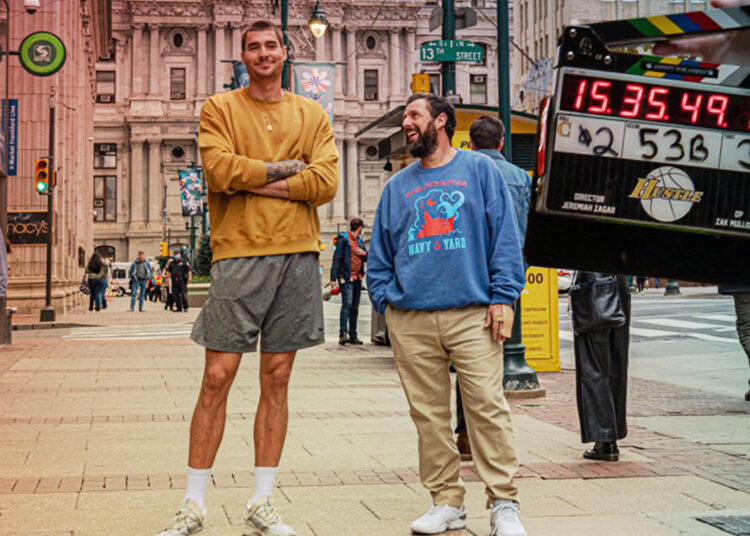 Jeremiah Zagar directed this upcoming American sports movie ‘Hustle’. The plot of the movie revolves around an ex-basketball scout who is determined to revive his career. In order to do that he recruits a player who has a checkered past. The player is coming from overseas to take part in the National Basketball Association.

Now there are some more movies that you can watch while waiting for ‘Hustle’ to release in June that you will definitely like.

Must Watch Movies Before ‘Hustle’:

Charles Stone III directed this American sports comedy movie that revolves around Uncle Drew who is an ex-baseball player. He has been a basketball legend and was supposed to be playing in the Rucker Classic with his team. But owing to a conflict they disappeared.

In the present time, we get introduced to an underappreciated Baseball coach named Dax Winslow. Casper Jones is the star player of the team that Dax coaches. But when a conflict spurs among him, his old rival, and Casper, Dax is advised to talk to Uncle Drew.

Dax soon recognizes how Uncle Drew is a great player in spite of his old age and decides to recruit him for the upcoming Rucker Classic tournament. But Uncle Drew tells him that his entire old team of players has to be recruited.

Steven Soderbergh directed this American sports drama movie that is entirely shot on iPhone 8. It was the second film shot on iPhone that is directed by Soderbergh. The first film was ‘Unsane’. The plot of the movie features a sports agent who has to execute a plan in three days and has to pitch a controversial chance to a novice basketball player who happens to be his client.

The cast members of the movie include Andre Holland, Zazie Beetz, Melvin Gregg, Sonja Sohn, Zachary Quinto, Kyle MacLachlan, Bill Duke, etc. The movie was released on January 27, 2019, at Slamdance Film Festival and on February 8, 2019, in the United States.

Gavin O’Connor directed this American sports drama movie that revolves around a construction worker who is an alcoholic. He gradually gets recruited at his old high school where he is called to be the head coach. Also, the man had been a star in that high school.

Charles Kinnane and Daniel Kinnane directed this American sports comedy movie that revolves around a football coach named Sean Payton. The name of his team is New Orleans Saints.

Three years after his team owns the Super Bowl, he gets suspended for one year because of getting involved in the Bountygate scandal. When he comes back to his hometown, he gets a chance to reconnect with his son who is now twelve years old. Eventually, Payton finds himself coaching the middle school football team where his son plays.

Craig Gillespie directed this American biological sports movie that features the true-life stories of two baseball pitchers named Rinku Singh and Dinesh Patel. The plot of the movie begins with a talent contest that a big-time sports agent J.B. Bernstein decides to stage in India in order to find real potential.

Two winners will be selected from the contestants who will be awarded the prize money along with an opportunity to receive coaching in the United States. The name of the contest is Million Dollar Arm.